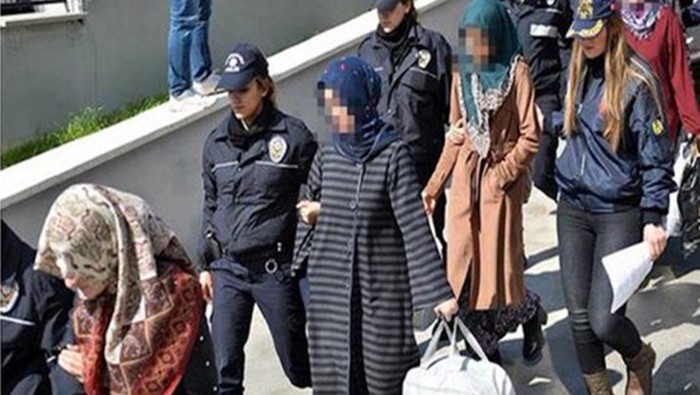 A Turkish court on Tuesday arrested and jailed 43 out of 80 women who were allegedly subjected to torture and ill treatment last week at the hands of officers at the Mersin Police Department on charges of organizing a sale to benefit families victimized by an ongoing purge carried out by the Turkish government against alleged members of the Gülen movement, the TR724 news website reported.

The 80 women were detained last week by police officers from the Anti-smuggling and Organized Crime Directorate (KOM) in Mersin province, according to a Twitter account named @Turkeydeiskence (Torture in Turkey).

The same account tweeted that the detainees were allegedly subjected to torture and other forms of ill treatment at the hands of a group of officers during their time in police custody.

The claim has neither been confirmed nor denied by Turkish authorities.
The account tweeted that among the detainees are a mother and her 2-month-old baby who have been held in police custody for four days.

Also, a 15-year old high school student has been held in detention at the juvenile branch office of the provincial police department.

The Twitter account also claimed that a lawyer representing the detainees fainted at the exit of the police department after witnessing the torture and ill treatment of their clients in police custody.

More than 17,000 women who have been jailed in an unprecedented crackdown have been subjected to torture and ill treatment in detention centers and prisons as part of the government’s systematic campaign of intimidation and persecution of critics and opponents, a report titled “Jailing Women In Turkey: Systematic Campaign of Persecution and Fear” released in April 2017 by SCF revealed.

Turkey has suspended or dismissed more than 150,000 judges, teachers, police and other civil servants since July 2016. Turkey’s interior minister announced on Dec. 12, 2017 that 55,665 people have been arrested. On Dec. 13, the Justice Ministry announced that 169,013 people have been the subject of legal proceedings on coup charges since the failed coup.

A total of 48,305 people were arrested by courts across Turkey in 2017 over their alleged links to the Gülen movement, Interior Minister Süleyman Soylu said on Dec. 2, 2017. “The number of detentions is nearly three times higher,” Soylu told a security meeting in İstanbul and claimed that “even these figures are not enough to reveal the severity of the issue.”
(Stockholm Center for Freedom [SCF] with Turkish Minute)