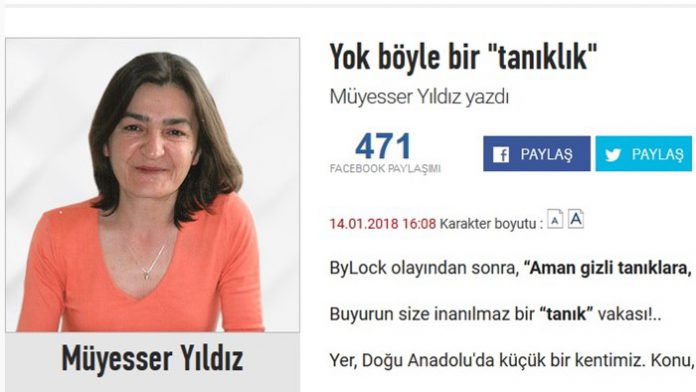 A Turkish man jailed over alleged links to the Gülen movement was reportedly tortured under custody while police threatened to rape his wife during the holy month of Ramadan.

According to OdaTV columnist Müyesser Yıldız on Sunday the man, reported to be from southeastern Turkey, was forced by the prosecutor to act as a witness against other suspects also accused of links to the Gülen movement.

During his testimony to the prosecutor, he reportedly admitted to ties to the movement and gave up the names of people in the city he knew to be affiliated with members of the movement.

“I pointed out the people who I know on the computer. Then they said: ‘Jailed coup plotters will be sentenced in any case. Mention their names in your testimony and you are free.’ They showed me their pictures and I said: ‘Yes, I know them.’ Even the suspects’ names had been added by them,” the man said during a court hearing last month.

In response to a question from the judge asking whether he was changing his testimony taken by the prosecutor, the man said: “Sir, I am a member of the movement. They detained me. Then they detained my wife and showed her to me from the next room. They took our children and put them into the care of the child protection agency. After days of torture, they said, ‘We will break our [Ramadan] fast with your wife.’ I asked what they wanted. They said: ‘In addition to what you have already said, we will show you pictures of some people, and you will say you know them. You will sign the testimony. We will first release your wife and then, if you repeat this testimony before the court, set you free.’ I was forced to sign it. I am about to go insane. I have been getting psychological treatment for some time now,” he said.

Yıldız said the hearing had to be repeated due to a problem with SEGBIS, a voice informatics system used to record court proceedings.

During the rescheduled hearing a week later, the man said he knew all the suspects charged in the case.

Yıldız said the man failed to answer detailed questions such as where the suspects were from and where they would meet up.

“Last but not least,” Yıldız said, “another suspect requested permission to speak from the judge and said the man had never mentioned his name and that he had nothing to do with him, a controversial statement followed by a strange question from the man: ‘Did I give your name, too?’” (Turkey Purge)