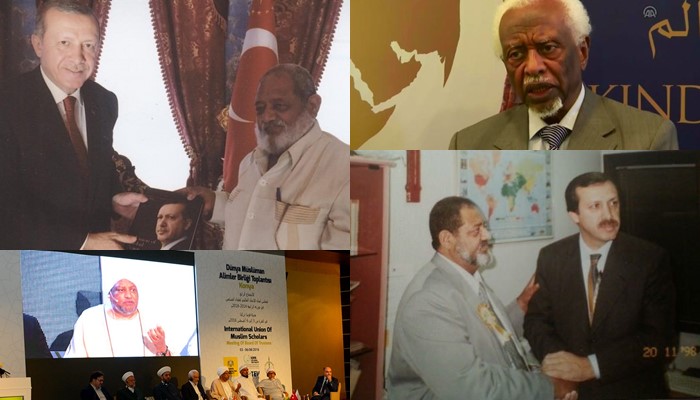 As the project of dismantling Turkey’s republican institutions including the military and judiciary is nearing an end, the regime of President Recep Tayyip Erdoğan has also increased its efforts to transform this strategically important country that straddles Asia and Europe into a magnet for all sorts of international radical Islamist figures from around the world.

The case of Sudan is a good snapshot of what Erdoğan envisions as a future for Turkey and the world and reveals how he plans to go about doing it. A private dinner event Erdoğan had

with a highly controversial figure in Sudan during his visit there in the last week of December is just the latest example of this ongoing endeavor on the part of the Turkish president to consolidate shadowy Islamist figures under his wing to appeal to the larger Muslim community in the world. Taking a break from his official itinerary, Erdoğan dropped by the house of Mohammed al-Fatih Hassanein, a former Sudanese diplomat and Islamist who is linked to extremists and armed groups. Hassanein set up the Third World Relief Agency (TWRA) in 1987 and ran the lines of black market arms and financing deals for Muslims during the Bosnian war.

The men have known each other since the 1970s and have kept in close contact. When Hassanein came under pressure in 1994 in Austria, where the police raided the TWRA as part of an investigation into money laundering and arms smuggling, he fled to Istanbul. Interestingly, his long-time friend Erdoğan was elected mayor of Istanbul, Turkey’s largest city, in the same year, and Hassanein continued running his network with the help of Erdoğan and others in Turkey. He visited Erdoğan in prison when the Turkish politician was convicted on charges of inciting violence and sentenced to 10 months. Erdoğan repaid this courtesy when he was in Khartoum in April 2006 and skipped dinner with Arab League representatives and got together with Hassanein instead.

Now Hassanein enjoys broad coverage from the Turkish government news agency as well as pro-government media outlets. He was featured again this week when he declared Erdoğan the leader of all Muslims. He said the two discussed the affairs of the Islamic world at a private dinner in his home and underlined that they both agreed to set up a joint bank to trade in local currencies. This is the best way to avoid sanction regimes, of course, and Hassanein’s specialty during the Bosnian war was tapping banking and financial services to broker arms deals. In fact, Erdoğan and other Turkish Islamists used Al Baraka Turkish Bank, set up by funds from Saudi financiers, and its affiliate Vakufska Banka in Sarajevo to transfer funds to Bosnian Muslims. Both banks have come under scrutiny over the years for alleged links to terror groups including al-Qaeda.

This is hardly surprising given Erdoğan’s track record of involvement with Islamist figures who were red flagged at one time or another for alleged links to deadly terror groups. He does not play by the rules, has zero respect for international law and does not shy away from circumventing sanctions laws that are binding on Turkey. In fact, the organized crime investigation that exposed kickbacks from land zoning and development projects in Istanbul on Dec. 25, 2013 revealed how Erdoğan had been secretly meeting with Yasin Al-Qadi, who was at the time listed as an al-Qaeda financier on the UN list and described as a specially designated global terrorist by the US Treasury. In violation of Turkish law and UN resolutions, Erdoğan shepherded him secretly into Turkey without going through customs or immigration checks. Al-Qadi was meeting with Turkish intelligence chief Hakan Fidan as well as with Erdoğan. This controversial figure was illegally moving funds in Turkey with the help of Erdoğan while striking business deals with Erdoğan’s son Bilal.

Therefore, skirting laws, be they Turkish criminal laws or international laws, has become rather a norm for Turkish President Erdoğan, who has recently been bragging about how he harshly rebuked a request by the International Criminal Court that the Turkish government enforce an arrest warrant for Sudanese President Omer al-Basher, who visited Turkey on Dec. 13, 2017. He publicly said several times in speeches how he laughed at the ICC’s request when he received the letter. Surely, Turkey is not the only country that avoided enforcing the warrant, but it is perhaps the first country that publicly boasted how it ditched the ICC. It shows the mindset of Erdoğan when it comes to protecting his Islamist brethren at all costs.

Going back to Sudan, another figure tapped by Erdoğan in promoting Islamist policies in Africa and the Middle East is Abdel Rahman Swar Al-Dahab, who was given the Benevolence Award by Türkiye Diyanet Vakfı (Diyanet Foundation of Turkey, or TDV), an entity that is controlled by the Erdoğan government. In March 2016, Al-Dahab came to Turkey to accept the award from Erdoğan. Al Dahab served briefly as president of Sudan after the ousting of President Gaafar Nimeiry in a military coup in 1985 and is now chairman of the board of trustees of the Islamic Call Organization (ICO), seen as close to the Muslim Brotherhood (MB). He is also the deputy head of the Union of Good (UOG), a Hamas fundraising group associated with the MB’s Youssef Qaradawi. In an interview with Turkey’s government news agency Anadolu, Al-Dahab praised the Turkish president and said the Islamic Umma was close to recovering its old strength under the leadership of the Turkish president.

The third person in Sudan who is working closely with the Erdoğan government is Issam (or Essam) El-Bashir, a senior figure in the MB’s global network. El-Bashir was in Turkey in August 2016 as part of a program organized by the International Union of Muslim Scholars (IUMS), a Muslim Brotherhood-linked organization that was led by pro-Erdoğan imam Yusuf al-Qaradawi, a cleric who endorsed suicide bombings and armed rebellion in Syria. The event was held in the conservative bastion of Konya province. The event, hosted by Erdoğan’s party, was a show of force for the MB, with representatives from 25 countries. Al-Qaradawi was the keynote speaker at the event.

This shows how Erdoğan is personally overseeing the expansion of the Islamist network globally and keeps lobbying for it, providing logistics and funding and in some cases even providing arms. It also confirms the view that Erdoğan has no interest whatsoever in mending fences with Egypt and the leading Gulf states. This is not in the interest of Turkey’s national security and foreign policy at all, but unfortunately Erdoğan and his Islamists have monopolized the policy decision-making process in Turkey, and there are no checks and balances left in the system to thwart the personal and ideological ambitions of these thugs. They are a danger for Turkey and clearly a threat for Turkey’s allies and partners as well.