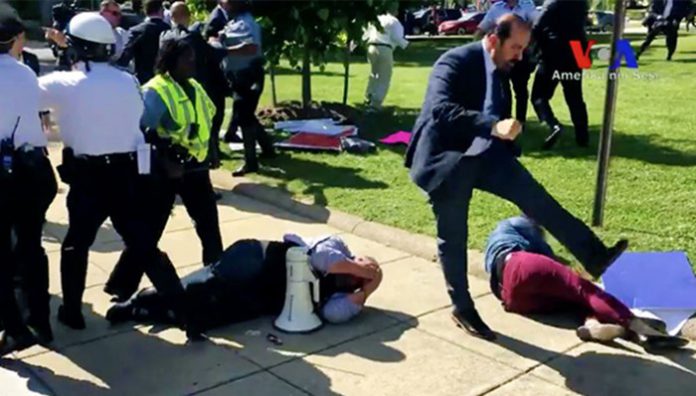 A US judge has dismissed charges against four of 19 defendants charged with attacking protesters outside the Turkish ambassador’s residence in Washington, D.C., during a May visit by Turkish President Recep Tayyip Erdoğan, the Ahval news website reported.

Court documents said nine protesters were injured in brawls when “Erdoğan supporters and Turkish security personnel” attacked demonstrators on Washington’s Sheridan Circle on May 16. Around a dozen demonstrators had gathered outside the residence chanting anti-Erdoğan and pro-Kurdish slogans as the Turkish president arrived after meeting with US President Donald Trump, according to case documents.

Two Erdoğan supporters, Sinan Narin of McLean, Virginia, and Eyüp Yıldırım of Manchester, New Jersey, pleaded guilty on Thursday to one count each of assault with significant bodily injury as part of a plea bargain. Sentencing is scheduled for March 15, 2018.

The agreed prison sentence is one year and one day, which, with time off for good behavior, translates to no more than 10-and-a-half months in jail. The defendants have already served six months in pretrial detention and will receive credit for time served, which brings the remaining time to be served to four-and-a-half months.

The other 17 of those originally charged are currently outside US jurisdiction. But the U.S. Attorney’s Office told Ahval it had moved to dismiss charges against four of the individuals charged, namely Yusuf Ayar, Feride Kayasan, Hamza Yurteri and Gökhan Yıldırım.
Turkey’s Foreign Ministry issued a statement on Aug. 30 condemning the US indictment, saying, “Those people have never even gone to the US.”

The dismissal of charges against four of those named at least partially confirms the Turkish Foreign Ministry’s assertion.