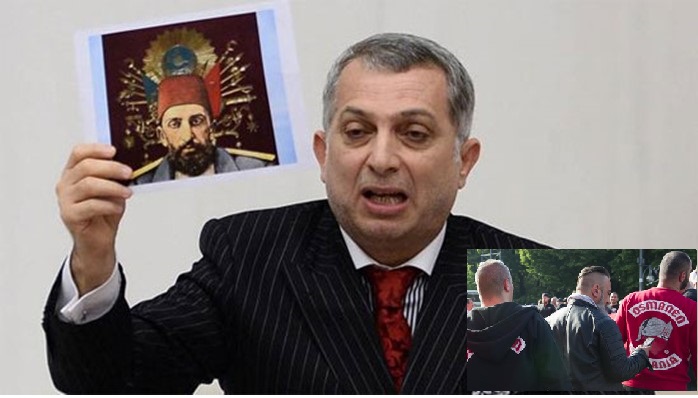 Metin Külünk, a deputy from Turkey’s ruling Justice and Development Party (AKP), on Friday described allegations made against him on a German news program as a plot by followers of the Gülen movement, accused by the Turkish government of orchestrating a failed coup last year, the state-owned Anadolu news agency reported.

Külünk, a close confidant of President Recep Tayyip Erdoğan, reportedly provided money to a boxing gang in Germany to purchase weapons, organize protests and target critics of the Turkish leader, Deutsche Welle (DW) had said in a news story on Friday.

According to research conducted by investigative news program “Frontal 21” on public broadcaster ZDF and the Stuttgarter Nachrichten daily and based on leaked German police wiretaps and surveillance records, Külünk directly and indirectly provided funds to the Turkish nationalist Osmanen Germania, a self-described boxing club and “brotherhood” in Germany suspected by authorities of involvement in criminal activity.

The results of the research suggest a relationship between Osmanen Germania and Külünk as well as Turkey’s National Intelligence Organization (MİT), the AKP’s European lobbying organization and Erdoğan himself, DW reported.

“None of the activities or visits I made in my personal capacity or on behalf of the AKP were illegal. On the contrary, transparency has always been a priority,” Külünk said.

He said the accusations defaming Erdoğan were typical of FETO, a derogatory term coined by the AKP government to describe the Gülen movement.

“On one hand the German authorities allow the bloody PKK [Kurdistan Workers’ Party] terror group and its supporters the freedom to blackmail, kidnap, organize protests and harass Turkish society [in Germany], and on the other it defames Turkey through fictional accusations,” he said.

He called the accusations an attempt to subject Turks in Europe to “cultural genocide.”

Osmanen Germania was reportedly instructed by Külünk to go after Kurds and critics of Erdoğan living in Germany. He also allegedly organized protests against last year’s Armenian genocide resolution passed by the German parliament.

Wiretapped phone conversations indicate that Külünk instructed Turks in Germany to “hit Kurds over the head with sticks,” film it and provide videos to the Turkish government to be used as a “deterrent” against Erdoğan’s critics.

In June 2016 specialists from the Hamburg criminal office observed Külünk personally hand two envelopes believed to have been full of money to Mehmet Bağcı, the former head of Osmanen Germania who has been in pre-trial detention in Germany since 2016.

Moments later Külünk called Erdoğan and organized protests against the Armenian genocide resolution in the German parliament. Osmanen Germania participated in the protests.

Bağcı had bragged of “very good contacts” who could put him in touch with MİT and said his men could take care of “that PKK thing,” referring to an April 2016 Kurdish demonstration in Stuttgart that led to a brawl between Turks and Kurds and left some 50 German police officers injured.

According to German police investigations, Bağcı pledged to one of Erdoğan’s chief advisors that he would fight on Turkey’s behalf against “terrorists” in Germany.

The police investigations suggest Osmanen Germania has had contacts with the Union of European Turkish Democrats (UETD), the AKP’s external lobbying group.

In one wiretapped phone conversation Külünk urged the former head of the UETD in Mannheim, Yilmaz İlkay Arin, to get Osmanen Germania to punish German comedian Jan Böhmermann for a controversial poem criticizing Erdoğan.

Böhmermann was warned, put under police protection and spent several weeks outside of Germany.

In other phone conversations with Turks living in Germany, Arin encouraged them to arm themselves, saying that he could facilitate “clean” weapons. A police report also showed that Bağcı in June 2016 ordered 10 handguns from a Serbian living in Germany.

The investigative report highlights that “the long arm of Erdoğan has not disappeared in Germany,” said Green Party Co-chair Cem Özdemir.

Critics of Turkey and pro-Kurdish organizations “are the object of Osmanen Germania’s threats,” Burkhard Freier, the head of North Rhine-Westphalia’s Office for the Protection of the Constitution, told German public broadcaster ZDF. “When it comes to disputes, then they don’t shy away from violence.”

In a series of tweets Külünk lambasted “fictional reports” and threats against Turks living in Europe and condemned threats and repression against “civil society” organizations in Germany.

“Everybody knows Germany’s open and hidden support for the PKK and FETO. The German deep state’s media operations are futilely trying to target me and Turkish civil society organizations to cover up their support for terrorist groups,” he wrote on the allegations.

FETO refers to the movement led by Fethullah Gülen, who Ankara accuses of masterminding a failed coup last year in Turkey.

The UETD condemned the “Frontal 21” and Stuttgarter Nachrichten investigation as not reflecting the truth and amounting to “slander.”

“We view this program as part of a campaign to denounce the UETD and which seeks to legally marginalize and silence the critical voice of the Turkish community,” the UETD said in a statement.

Osmanen Germania has repeatedly denied media accusations against the group on its Facebook page. It says that detainees such as Bağcı are not members, that the group no longer has a president or vice president and that it has undergone restructuring.