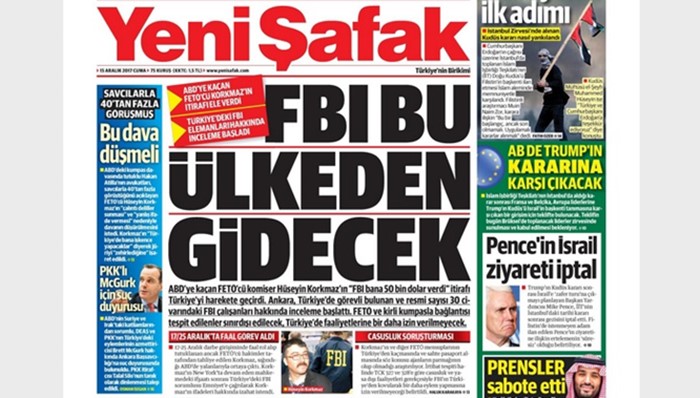 The Yeni Şafak daily, a staunch supporter of Turkish President Recep Tayyip Erdoğan, on Friday said that in response to the trial of a Turkish banker in New York, Turkey had launched an investigation into some 30 Federal Bureau of Investigation (FBI) agents in Turkey, claiming they would all be expelled if any links to the faith-based Gülen movement were discovered.

According to the daily, the decision came after the testimony of Hüseyin Korkmaz, a former İstanbul police officer who was arrested by the Erdoğan regime in the aftermath of corruption operations in late 2013, in a New York court where Mehmet Hakan Atilla, an executive of Turkey’s state-owned Halkbank, is being tried for violating US sanctions on Iran.

Korkmaz called Erdoğan the “No. 1” target in a group that also included Mehmet Zafer Çağlayan, the former economy minister, and Süleyman Aslan, a former chief executive at Halkbank, a large Turkish state-owned bank that was central to the sanction-busting scheme.

Korkmaz, who was paid $50,000 by the FBI as part of a witness program, said he brought some evidence of the Dec. 17, 2013 corruption operations in which Turkish-Iranian gold trader Reza Zarrab and the inner circle of the ruling Justice and Development Party (AKP) government and then-Prime Minister Erdoğan were implicated.

Following the testimony of Korkmaz, who left Turkey illegally in 2016 after his release from prison in 2015, the FBI’s legal attaché at the US Embassy in Ankara was summoned to the Ankara Police Department on Wednesday.

According to Yeni Şafak, the role of FBI and Drug Enforcement Administration (DEA) staff members, who officially number more than 30 in Turkey, and Korkmaz’s illegal departure from Turkey and arrival in the US with a fake passport will all be investigated.

If any links to Korkmaz are identified, the FBI agents will face legal process in accordance with Turkish Penal Code (TCK) Articles 327 and 328 related to the leak of classified state documents. The FBI agents will be expelled, and no other US intelligence officials will be allowed to work in Turkey, the daily claimed.