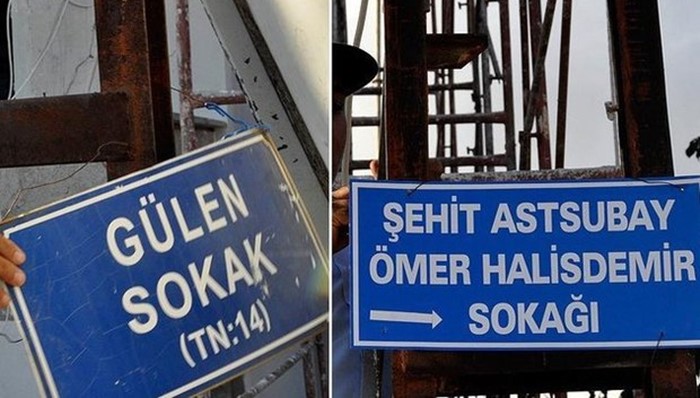 The Istanbul Municipality has changed the names of 192 streets in a campaign largely aimed at removing any connection to Turkish Islamic cleric Fethullah Gülen and his movement.

The Turkish government accuses the Gülen movement of masterminding a July 15, 2016 coup attempt, although the movement denies involvement. Nearly 150,000 people have been taken into police custody, of which 60,000 were jailed over Gülen links since the summer of 2016.

Turkish media reported that 192 streets and roads were renamed following the approval of the city council.

Two streets, both called Gülen Street, in Istanbul’s historic Eyüp district, were named after Omer Halisdemir, a Turkish soldier who was killed after shooting an alleged coup plotter on the night of the failed coup. Another 25 Gülen Streets were also renamed. Apart from being the surname of the Islamic cleric, “gülen” translates into English as smiling.

Four streets called Parallel Street were renamed as the government has often accused the Gülenists of “infiltrating state institutions.”

The Istanbul Municipality also removed any street name that resembles media organizations which were earlier closed over Gülen links such as Zaman, Samanyolu, Sızıntı, Aksiyon and Cihan, and journalists who used to work for those publications including Ekrem Dumanli.

A street named after Turkey’s former top football scorer Hakan Sukur has also been renamed as the former football star is on the government’s target list for his public support for the movement.

The name of Kandil (oil lamp) Street was also changed as the outlawed Kurdistan Workers Party (PKK) has its base in the Qandil Mountains of northern Iraq.

Streets with names that were considered morally inappropriate were also changed. Fak, which translates into snare, is one such word that was removed from the streets as it is pronounced like the “F” word in English. (Turkey Purge)