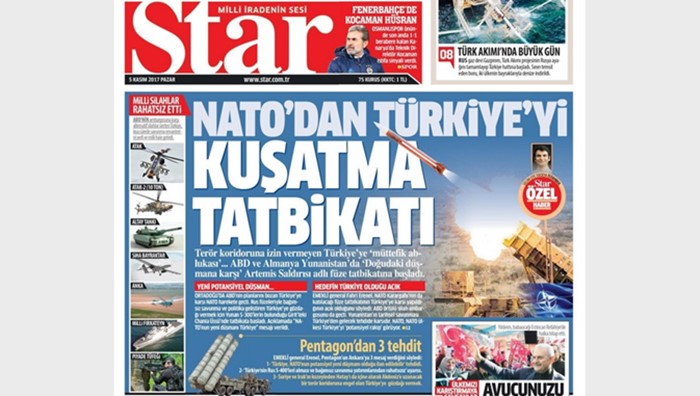 The Star daily, a staunch supporter of Turkish President Recep Tayyip Erdoğan, on Sunday said NATO has started a new military drill in the Mediterranean to surround Turkey.

“The US, Germany and Greece have launched a missile drill called Artemis to attack ‘an enemy in the East’,” the newspaper said in its lead story.

“The US, which selected terrorist organizations the PKK/PYD [Kurdistan Workers’ Party/ Syrian Kurdish Democratic Union Party] for an alliance and equipped them with heavy weapons, has taken another step against Turkey that became pretty clear following the coup attempt on July 15 [2016]. Washington, which has imposed a covert weapons embargo on Turkey, and Germany, which talks about ‘occupying Turkey,’ have launched a joint missile drill in Greece,” the daily claimed.

According to Star the drill is a result of Turkey’s insistence on buying an S-400 air defense system from Russia despite threats from NATO.

Speaking to the daily, retired Gen. Fahri Erenel said that NATO, for the first time in its history, has declared a member state a potential new enemy.

Star noted that the drill launched on Crete with the participation of over 200 American and 370 German soldiers will continue until Nov. 9.