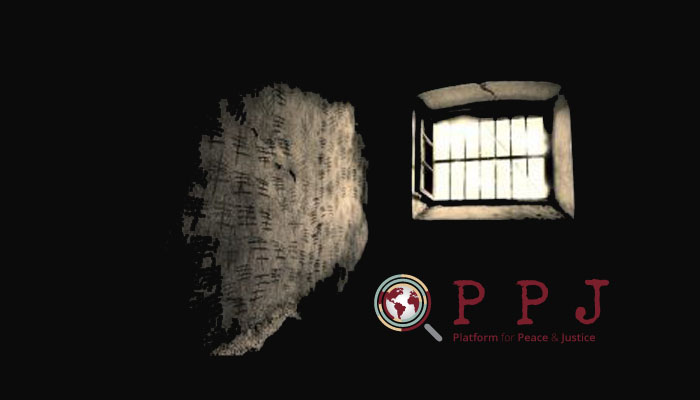 A comprehensive report, released last week by the Platform for Peace & Justice (PPJ) on prison conditions in Turkey under a state of emergency declared in the aftermath of a coup attempt on July 15, 2016, has exposed widespread human rights violations and inadequate facilities in 72 out of 80 prisons in the country, the Stockholm Center for Freedom (SCF) reported.

The recently released PPJ report, which focuses on the general conditions of 80 prisons in Turkey, is based on information and data collected by volunteers conducting face-to-face interviews with 66 lawyers and 197 family members of detainees. The report tries to shed light on the common practices in prisons rather than the individual stories of detainees in order to illustrate the general circumstances in Turkish prisons.

According to the findings of the report the number of toilets and shower facilities were built for the ideal capacity of prisons, but because the number of detainees staying in one ward under emergency rule is well over that capacity, every 25 to 30 detainees have to share one toilet and one shower, causing long queues. “Taking into consideration, the limited availability of hot water as well, the opportunity for taking a shower is very limited. For instance, in some prisons, such as the Bandırma Type T Prison, each detainee can only take a shower once a week, and for only 5 minutes,” said the report.

The report provides statistics on overcrowded and over-capacity prisons around the country, one of them being the women’s section of Tarsus Prison, where 70 women are living in a ward designed for a maximum of 17 inmates. In the men’s section of the same prison, 60 detainees are confined to a ward meant for 26 people.

In crowded prisons with poor conditions, some detainees have to sleep on bedding laid out on the floor due to the shortage of beds, the report stated, and added that “it is often reported that the right of detainees to watch television and listen to the radio is seriously restricted. While some prisons do not allow radio and television on the wards, the prisons that allow television and radio on the wards, allow only the channels that broadcast pro-government programmes, and the broadcast of opposition TV channels is banned by the prison administrations.”

According to the findings of the PPJ report, limitations imposed on the right to follow periodicals and non-periodicals are also usual. “It is reported that the detainees are forced to be content with only the few books available in the prison’s library and they are denied the right to access books from outside. This is despite the fact that access to books is not banned by the courts,” said the report. “While pro-government newspapers and magazines are allowed in the prisons, the newspapers seen as opposing the government, such as Yeni Asya, are not allowed,” said the report.

Another significant violation of human rights revealed in the report is the arbitrary ban imposed on participating in cultural and arts events, exclusively for those who are detained under the claim of membership in the Gülen movement. In this regard, the detainees are not only denied the right to participate in such activities organized by the prison administrations, they are also not allowed to organize any such event themselves, either.

The report has also underlined the fact that “Apart from being banned from being involved in cultural and arts activities, these detainees are also denied the right to join the courses organised within the prison. Likewise, in most of the prisons, the detainees –a big majority of whom are those who are in custody due to claims that they are affiliated to the Gülen movement – are not allowed to use the sports facilities in the prisons. In some prisons, however, the use of this facility is anyway very restricted.”

The report also covers many other practices in the prisons such as the right to healthcare, accommodation provided for the children of detainees, sending and receiving letters, fax and telegraph messages, nutrition and clothing.

The report stated that with significant human rights violation claims, the prisons of Turkey are places that are closed to inspection by both national and international civil rights organizations and cannot be efficiently scrutinized by the UN or the EU.

“Even the reports about these prisons, which have managed to be prepared after restricted inspections, are not allowed to be made public. Because of the oppression in the country, neither detainees nor their lawyers are able to pursue the violations committed in these prisons by means of either judicial or administrative remedies, and for the same reasons, they cannot make these violations known to the public,” said the PPJ report.

The report said that ill-treatment such as torture, beating, nudity, people being left in physically uncomfortable positions for long periods of time and threats of rape occur during the custody period, which has been increased from one day to 30 days by an emergency decree. Also, allegations of threats to lawyers and interference in medical examinations in order to cover up the abuses have been reported. According to the PPJ report, more than 50 people have lost their lives by committing suicide due to torture and ill treatment. “Some claim that many of those deaths were extrajudicial killings but the authorities declared that they had committed suicide,” said the report.

The report has underlined that news of people who are subjected to ill treatment, not just during the custody period but also after they have been transferred to prison, finds its way into the media despite the media being almost completely under the control of the government. “The relatively freer social media is the medium through which such violations can often be exposed,” according to the report.

Stating that the emergency law decrees issued by the ruling power were the forerunners to the extensive rights violations committed in prisons, the report stated that “many rights violations in fact started as a result of the impunity brought by the state of emergency regime. On October 14, 2016, Enis Yavuz Yıldırım, the General Director of Prisons and Detention Centres, stated to the Turkish Parliament Human Rights Investigation Committee that: Detainees are being searched naked; Torture allegations are being handled as discrete cases; The detainee-lawyer meetings are being recorded; Detainees are not allowed to obtain clothes from outside, but are forced to buy them from the shop inside the prison; Suicides are unpreventable; A harsh intervention team will be formed to deal with the detainees.”

According to the report, the lawyers, who are seen as the most effective mediators for exposing the violations of human rights and bringing them under investigation, are another occupational group that has been targeted by the government. “Investigations have been launched against thousands of lawyers who undertook the legal counselling of individuals who were detained and arrested after the July 15 coup attempt, and as of today, 522 of them have themselves been detained. Therefore, it is extremely difficult for lawyers to expose and file complaints about violations committed against the rights of the detainees,” said the report.

PPJ has called on the EU, the UN and the international nongovernmental organizations in the report to play active roles in pinpointing the violations committed in Turkey’s prisons and to raise a decisive and strong voice asking the regime to put an end to these assaults against the most fundamental rights and freedoms.

Turkey survived an attempted coup on July 15, 2016 that killed 249 people. Immediately after the putsch, the Justice and Development Party (AKP) government along with Turkey’s President Recep Tayyip Erdoğan pinned the blame on the Gülen movement.