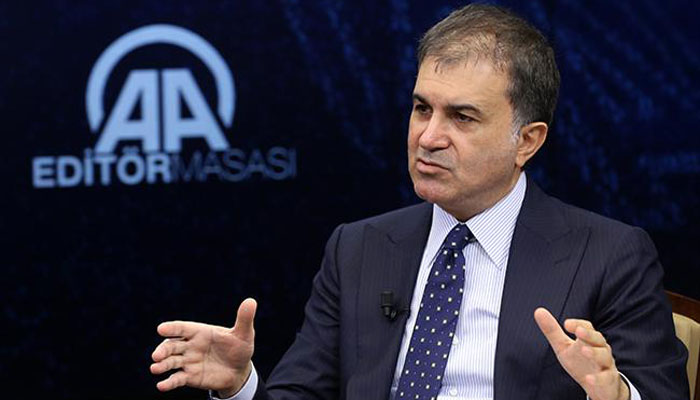 Turkey’s Minister for EU Affairs Ömer Çelik said on Wednesday that the European Union’s intention to remove pre-accession financial assistance to Turkey “means nothing” to Ankara.

According to the state-run Anadolu news agency, Çelik targeted German Chancellor Angela Merkel and said that “those who voice the intention of suspending accession talks with Turkey are also degrading the EU’s reputation.”

Çelik’s remarks came a day after Merkel asked her fellow leaders to cut the Instrument for Pre-Accession Assistance (IPA) for Turkey.

He also criticized Germany for turning its bilateral issues with Turkey into an issue between Ankara and Brussels.

Çelik recalled remarks last week made by the EU’s commissioner for enlargement, Johannes Hahn, which implied a privileged partnership instead of full membership.

“If the EU plans to freeze the accession process with Turkey but wants to continue cooperation on energy, economy and transportation, opening new areas of collaboration, that will not be the case for Ankara,” Çelik said.

On Oct. 16 EU Foreign Policy Chief Federica Mogherini said the EU would strengthen cooperation with Turkey on issues “related to regional dynamics” and work on plans suggesting a privileged partnership.

Merkel came under enormous pressure from her rivals before the Sept. 24 elections to suspend Turkey’s EU membership talks amid recent tensions.

She promised last month to discuss the future of EU-Turkey ties with other European leaders but also underlined importance of maintaining dialogue with Ankara.

Merkel said during a televised debate in September that Turkey should not become a member of the European Union — Turkey’s largest trading partner with which it has a customs union.

She said she would talk to Germany’s EU partners to reach a compromise on ending Turkey’s accession talks with the bloc.

Berlin’s relations with Ankara have been strained by Turkey’s crackdown on government critics after a failed coup last year. Germany and its partners in the European Union say the crackdown undermines democracy.

Turkey and Germany are also at odds over Berlin’s refusal to extradite asylum seekers Turkish President Erdoğan and his government accuse of involvement in the botched coup against him.

Germany has been angered by Turkey’s arrest of around a dozen German citizens, including German-Turkish journalist Deniz Yücel, who has been held for more than 200 days.