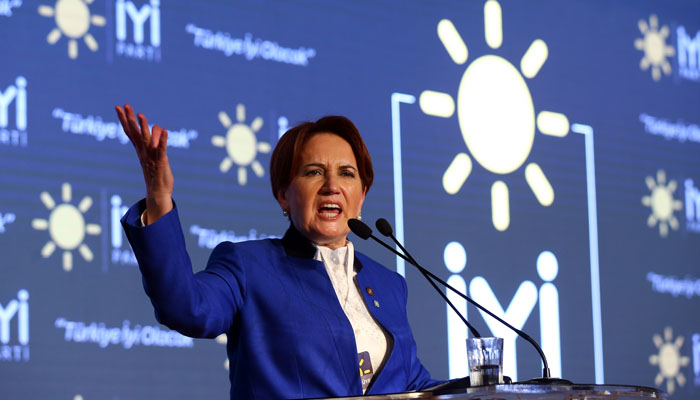 The İyi Parti (Good Party, İP), operating under the motto “Turkey Will Be Good,” was announced during a program attended by thousands of supporters at the Nazım Hikmet Cultural Center in the Turkish capital of Ankara, the Cumhuriyet daily reported.

A large group in the audience chanted “Prime Minister Meral!” to which Akşener responded, “I will be president.”

In her speech Akşener said: “The post-modern national chief period [Erdoğan’s authoritarian presidential rule] has started, but it won’t last long. Turkey is exhausted; the nation is exhausted.”

In addition to being heavily critical of the current authoritarian Islamist government and the president, Akşener also slammed the militant secularist elites who suppressed civilian political life two decades ago when she served as minister of internal affairs. “I would like to address the mighty [military and civilian] groups of Feb. 28 [the ‘post-modern coup’ of 1997 that ousted the conservative-Islamist government]. Are you happy? Our nation, which you [suffocated] while trying to protect them, took the path of those [the AKP] who promised them freedom. Now they [the AKP] are assuming your [militant, secularist, authoritarian] role. The politician you tried to frighten, the woman you defamed, is here. I don’t know where you are.

According to the Hürriyet Daily News, a split in the Nationalist Movement Party (MHP) during the April 16 constitutional referendum on shifting to an executive presidential system sped up the foundation of the new party, after MHP Chairman Devlet Bahçeli supported the changes pushed by President Erdoğan.

Despite splits in the MHP, the party’s official backing helped the “yes” campaign secure a narrow win in the referendum. Akşener and her followers campaigned for a “no” vote and accused Bahçeli of being too close to the government.

Akşener was Turkey’s first female interior minister and served in that position between 1996 and 1997 until the government, a conservative-Islamist coalition, was ousted by the Turkish military.