Turkey’s Islamist and neo-nationalist government led by President Recep Tayyip Erdoğan has been busy planting religious zealots, fanatics and jihadists in key positions in the judiciary, which is bent on acting as a political tool to persecute critics and opponents of one-man rule.

A case in point is the latest government move to appoint a man with links to a controversial jihadist cleric who endorsed armed conflict to a top position in the Justice Ministry. His name is Selahaddin Menteş, who was named on Oct. 17 by the government to become undersecretary of the Ministry of Justice, the number-two position in this critical ministry. As undersecretary he will effectively be leading Turkey’s judicial council, the Board of Judges and Prosecutors (HSK), which decides on the promotion, appointment, investigation and dismissal of judges and prosecutors in the country.

In other words, Menteş would act as a government commissioner in determining the fate of legal proceedings in Turkish courts where cases get decided based on the political signals sent by the Erdoğan government. The chief public prosecutors in 81 provinces would look to this man for direction on whether to launch criminal investigations into suspects or to drop and hush up probes that could embarrass Erdoğan and his associates. Independent judges and prosecutors who don’t toe the line with the government would face various punishments, ranging from demotion and reassignment to purge and arrest.

The fact that the government purged 4,238 judges and prosecutors (some 30 percent of all members of the Turkish judiciary) and arrested 2,302 of them on fabricated charges in the last year alone shows the alarming transformation in the country’s judiciary. A group of Islamist and neo-nationalist figures are now filling the empty positions in the judiciary to act as foot soldiers in pursuing mass persecution against all critics and opponents of the Erdoğan regime, including journalists, human rights defenders, civil society members and even foreign nationals.

Menteş’s Twitter profile gives us some clues to this senior government official’s jihadist leanings as he shared messages from radical cleric Nureddin (or Nurettin) Yıldız several times. Yıldız has endorsed jihadist wars from Syria to China. He had close ties to the leader of Ahrar al-Sham, Hassan Abboud, also known by his nom de guerre Abu Abdullah al-Hamawi, who was killed in September 2014. He had pictures with Abboud during a visit to İdlib, a bastion of al-Qaeda militants. Abdallah Muhammad Bin Sulayman Al-Muhaysini, an Al-Qaeda cleric of Saudi origin who is among the leaders of al-Qaeda group Hay’at Tahrir al-Sham in Syria, urged Turks to read the books of Yıldız, in a special video message addressed to Turkish youth.

Yıldız’s venomous preaching has already taken a toll. An al-Qaeda-linked Turkish police officer who assassinated the Russian ambassador to Turkey, Andrei Karlov, on Dec. 19, 2016, was found to be among attendees of his study circle. The policeman was believed to have been inspired by Yıldız to murder the ambassador over Moscow’s campaign in Syria against jihadist groups. This dangerous cleric continues to preach in Ankara’s Bayrampaşa district, a neighborhood from where Turkish jihadist groups including the Islamic State in Iraq and the Levant (ISIL) drew recruits and continue to incite militants.

Yıldız has been a lecturer at Erdoğan’s ruling Justice and Development Party’s (AKP) youth branches and an active cleric in foundations run by Erdoğan’s family. He has been protected by the government when he runs into trouble. For example, when he gave his blessing to marrying girls as young as six, which sparked outrage and prompted a criminal probe into him, he was saved from legal woes thanks to Erdoğan’s intervention. This hate-spewing man also advocated a view that members of the Gülen movement, a civic group that is highly critical of Erdoğan over corruption and the Turkish government aiding and abetting armed jihadist groups, must be executed, hanged and their arms and legs cut off.

As undersecretary of the Justice Ministry and a member of the HSK, Menteş will play a critical role in the criminal cases of more than 50,000 people who have been jailed over alleged links to the Gülen movement. It is not hard to imagine what kind of fate awaits these people, most of whom are kept in pretrial detention without even a trial or conviction, when Menteş’s mentor cleric urged hanging and chopping off their arms and legs in a publicly aired video that is posted on YouTube. US-based Turkish Islamic scholar Fethullah Gülen has been targeted by Erdoğan and his jihadist thugs because of Gülen’s criticism of the Turkish government’s aiding and abetting of armed jihadist groups.

The Turkish Justice Ministry’s number-two man also appears to be a fan of Kadir Mısıroğlu, a radical xenophobe who has been working with Erdoğan since the 1980s, freely preaching the idea of Erdoğan’s caliphate. Menteş’s Twitter history shows he shared the messages of Mısıroğlu as well. Erdoğan, who personally visited Mısıroğlu at his home in December 2014 and hosted him in the presidential palace as one of Turkey’s leading intellectuals, tapped this man to promote his Islamist project to the Turkish public. This vile man claims that with military incursions into Syria and Iraq, President Erdoğan will be able to resurrect the Ottoman Empire and declare a caliphate. He even labeled voters who did not cast their votes for Erdoğan as “infidels.”

Menteş, who now holds two critical positions in both the Justice Ministry and on the HSK judicial council, is also the head of an ad hoc commission set up by the government to review appeals by dismissed public employees, who number more than 150,000. The commission received 101,304 complaints between July 17 and Oct. 4, 2017. After the new appointment, it is not certain whether Menteş will be able to lead the commission, whose establishment was touted as a success by Council of Europe Secretary-General Thorbjørn Jagland for offering a new remedy to so many victimized people in Turkey. The commission was stillborn given its modus operandi and the profile of its members including Menteş.

No wonder Justice Minister Abdulhamit Gül, who is a lifelong Islamist, picked this man to lead the judiciary with the approval of Erdoğan. The justice minister himself is a staunchly anti-Western figure who has been busy recruiting partisan young Islamists who were affiliated with the ruling AKP to become judges and prosecutors. Gül’s father-in-law is Şeref Malkoç, the chief ombudsman in Turkey’s Public Monitoring Institution (KDK), which oversees complaints against public agencies. Malkoç, the chief aide to Erdoğan before he was tapped to lead the KDK, is an openly anti-Semitic man who told the audience in a TV interview how Jews produce all terrorism in the world and secretly rule it and the global economy. It would be foolhardy to expect a just delivery of remedies from these xenophobic figures who oversee the critical judicial institutions in Turkey.

Looking at this farce, politically motivated indictments filed against tens of thousands of innocent people by public prosecutors eager to show their ideological affiliation and jihadist leanings to the Erdoğan government, one must conclude that Turkey’s judiciary is now weaponized in the hands of the Islamist rulers. It should come as no surprise to see scandalous decisions by judges in cases that have no merit under the rule of law and lack basic evidence to charge and convict defendants. It makes no sense why the European Union is still funding the Turkish judiciary in various programs when Erdoğan’s judges and prosecutors continue to abuse the criminal justice system to lock up foreign nationals as hostages as well. It is certainly mind-boggling why the Council of Europe’s European Court of Human Rights still considers the Turkish judiciary to be an effective domestic remedy and continues rejecting cases from Turkish victims based on the lack of exhaustion of local remedies, which are already nonexistent. 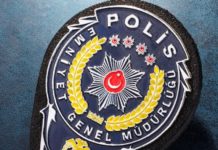 Turkish delivery man could get 18 years for spitting on customer’s...