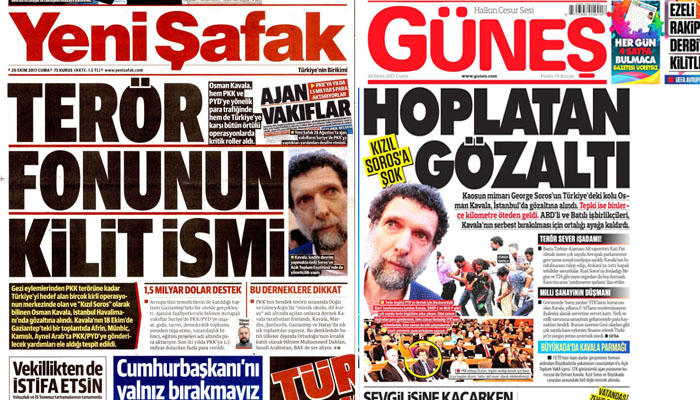 In its front-page story on Friday Yeni Şafak launched a smear campaign against Kavala under the headline “Key Figure of Terror Fund” next to a large photo of him.

The pro-government daily went on to say: “Osman Kavala played a critical role in money transfers to the PKK [outlawed Kurdistan Workers’ Party] and the PYD [Syrian Kurdish Democratic Union Party] as well as in all other covert plots against Turkey.”

In a relentless demonization campaign, another pro-government daily, Güneş, defamed Kavala by saying that he supported civil rights movements and minorities, as if such support constituted a crime.

Güneş claimed on Thursday that Kavala was running a criminal organization that supported the Gezi Park “coup attempt,” which was actually a popular youth protest for the right to the city and further liberties, recognized the Armenian genocide of 1915, “supported the PKK” and allied with the pro-Kurdish Peoples’ Democratic Party (HDP) in their struggle against the increasingly authoritarian Turkish President Recep Tayyip Erdoğan.

Kavala was taken into custody as he returned from a meeting in the southeastern city of Gaziantep after an order was issued for a seven-day detention, according to a T24 report.

“On eve of European Council and one week before trial of 11 human rights defenders, Turkey detains leading figure in civil society Osman Kavala. Osman Kavala has worked tirelessly to build [reconciliation], dialogue and support the rule of law in Turkey. Release him from detention,” Sinclair-Webb said in a tweet.

Kati Piri, the European Parliament’s rapporteur for Turkey, also reacted negatively to the detention of Kavala.

“Very disturbing news that Osman Kavala has been detained in Istanbul. Will propose in EP to launch urgent call for his release!” Piri tweeted.

Marietje Schaake, another member of the European Parliament, also criticized the detention: “Detained on what ground?! Will raise the case of #OsmanKavala immediately! #Turkey.”

Rebecca Harms, a member of the Greens/EFA group in the European Parliament, joined reactions from Brussels on Thursday and tweeted: “New escalation:Detention of #OsmanKavala must be an issue at #EUCO Brussels @JunckerEU @eucopresident To work for democracy is not a crime.”

According to the T24 news website, Kavala was detained as part of a confidential investigation, and sources close to the Ministry of Interior said the businessman would be questioned about some meetings held before a failed coup attempt in Turkey on July 15, 2016.

There have also been reactions to Kavala’s detention from the US and France, The New York Times reported on Thursday. According to the report “U.S. State Department spokeswoman Heather Nauert said Kavala’s arrest was an example of a ‘very alarming trend’ of detention of civil society leaders, human rights defenders, journalists, academics and activists in Turkey. “We have expressed to the Turkish government our concerns on many occasions about this trend. … It remains a major concern of ours,” she told reporters in Washington.

Underlining their worries about the arrest of Kavala, France’s foreign ministry spokesperson Agnes Romatet-Espagne called Kavala “one of the most important and respected figures of the Turkish cultural scene and of civil society.” She reportedly said on Thursday: “France like other European countries, regularly cooperate with Mr Kavala, who is a regular interlocutor to our embassy. [We] will be very attentive to developments in this case.”

Turkey has been criticized for a purge of public servants and a crackdown on the opposition and civil society.

The İstanbul 35th High Criminal Court on Oct. 17 accepted an indictment drafted by the İstanbul Public Prosecutor’s Office seeking up to 15 years each for the 11 people.

Turkey’s Justice Ministry announced on July 13 that 50,510 people have been arrested and 169,013 have been the subject of legal proceedings on coup charges since a failed coup on July 15, 2016.

Turkey has suspended or dismissed more than 150,000 judges, teachers, police and civil servants since July 15 through government decrees issued as part of the state of emergency, declared immediately following the abortive coup.

The Human Rights Association (İHD) reported on Oct. 16 that a total of 4,240 judges and prosecutors were dismissed by Turkey’s Board of Judges and Prosecutors (HSK).

Forty-eight private health companies were closed, and two were allowed to reopen. Some 2,350 private schools, courses and dormitories, 15 private universities, 19 unions and confederations, 1,412 association and 139 foundations were closed by the government under emergency rule.

Nine hundred sixty-nine private companies valued at TL 41 billion with a workforce of 47,000 were seized by the government.

One hundred eighty-five media companies were closed. Only 23 of them were allowed to restart operations. One hundred seventy-four journalists are still in prison, and 889 press cards were cancelled in 2016 alone.