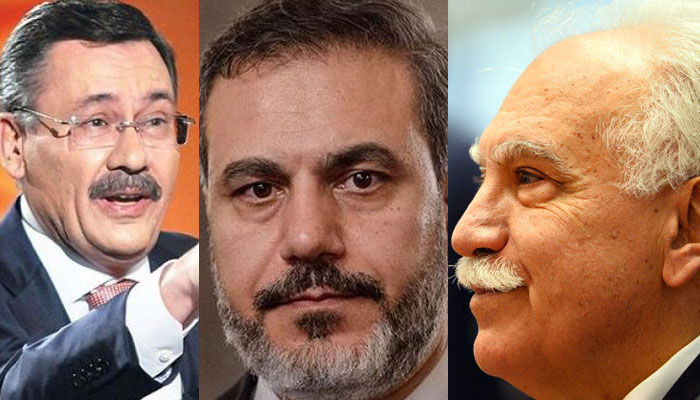 Turkish ultranationalist and Eurasianist Homeland Party (VP) Chairperson Doğu Perinçek has admitted that he, the Turkish National Intelligence Organization (MİT) and Ankara Metropolitan Municipality Mayor Melih Gökçek had all known in advance that a coup attempt would take place in Turkey on July 15, 2016, the Cumhuriyet daily reported on Thursday.

During a live show on Cem TV, Perinçek said: “When [Eurasianist theorist allegedly influential with Russian President Vladimir Putin] Alexandr Dugin told us about some extraordinary activity on the part of the Turkish Army, we asked him [Dugin] to inform the [Turkish] government about it. He told the Ankara mayor [Melih Gökçek] what he had told us. [Therefore] the government already knew about a possible coup attempt beforehand. If I [Perinçek] knew about this [possible coup attempt], how on earth could MİT not have known about it?”

Claiming that his party has been influential with Turkish President Recep Tayyip Erdoğan, Perinçek said: “We brought Erdoğan to the stance of ‘independence’; our stance is to challenge the US,” adding: “We don’t claim that Tayyip Erdoğan shares our position on all issues. On such issues as ‘independence’ [of Turkey] and those related to Iran, Iraq and Syria, he [Erdoğan] shares our stance. If he accepted all we said, he would have been a member of our [Homeland] party.

Alexandr Dugin, known for his illiberal and anti-Western views, appeared as a guest at a ruling Justice and Development Party (AKP) meeting in Parliament in November 2016.

Dugin, who posed with Prime Minister Binali Yıldırım following the latter’s speech, told reporters after a tour of parts of the parliament building damaged during a July 15 coup attempt that Putin did not send written messages but that he conveys his messages with his actions. According to Dugin, Putin was suggesting to Turkey a strategic partnership, the meaning of which should be analyzed by experts and intellectuals.

When asked whether such a partnership would conflict with Turkey’s NATO membership, Dugin said that it is Turkey’s decision as an independent nation to determine who is an enemy and who is a friend.

Dugin said Turkey knows who stood by those who bombed the parliament building and that it was definitely not Russia. According to him, the US and the Western world are disturbed by a Russia-Turkey rapprochement.

Perinçek said in February of this year that his party officials had informed the pro-government Yeni Şafak daily about a possible coup attempt the day before a putsch on July 15 of last year.

Speaking during a press conference at VP İstanbul provincial headquarters, Perinçek said his deputy chairman Atilla Uğur had informed Yeni Şafak and contacted the government through their channels about the coup attempt.

In remarks following the failed coup attempt last July, Perinçek said that “the secret state, the clandestine organization that the US established in Turkey, crashed on the night of July 15 and was cleansed from the judiciary and the military.” According to Perinçek, the Turkish military has returned to its Kemalist origins, and the countries that the US wants to divide should resist.

Despite ideological differences with the AKP and President Erdoğan, Perinçek, who is known for his pro-Russian and fascist views, openly supports Erdoğan’s purge and witch-hunt against the faith-based Gülen movement, which the AKP and Erdoğan accuse of being behind the failed coup.

Ankara Mayor Gökçek was also ordered by President Erdoğan and the AKP to resign this month.

According to Voice of America (VOA) Gökçek, who has been Ankara mayor since 1994 and won five consecutive elections, has so far stayed in place, despite widespread speculation that he would step down.

Gökçek has avoided addressing the resignation issue and pointedly steered clear of the subject in public when he made an unexpected visit to the presidential palace this month.

“I presented to my president all the project details of the museum to be built opposite the [presidential] palace. I also provided information about ongoing municipal projects. … For the public’s information,” he wrote on Twitter.

Gökçek, generally regarded as a staunch Erdoğan loyalist, is well known in Turkey for tweets in which he has engaged in spats with journalists and other senior members of the AKP.

In February he suggested that US-based cleric Fethullah Gülen, blamed for last year’s failed coup, might be plotting an earthquake, with the help of foreign powers, to damage the economy.