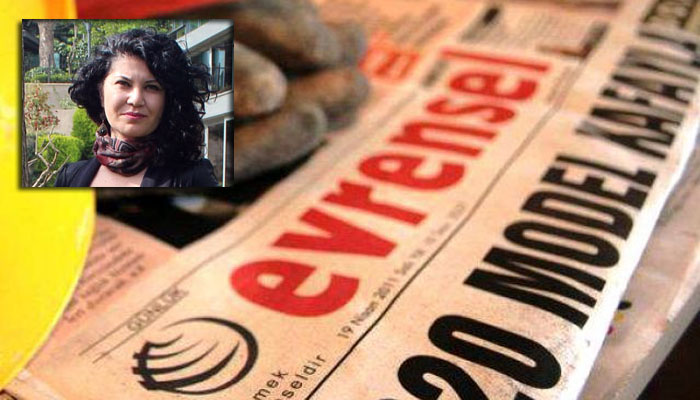 Çağrı Sarı, managing editor of the left-wing Turkish Evrensel daily, has been given a suspended sentence of 11 months, 20 days on condition of a one-year probation, the Bianet news website reported on Thursday.

The court suspended her sentence on the grounds that she had not been convicted of a “willful crime” in the past and for good conduct during the trial, according to the report.

The final hearing of the trial was held before the Bakırköy 2nd Penal Court of First Instance. The court ruled that the statement “The president taking to the streets holding the Quran in his hand did not even hesitate to make his family an election tool. He was not able to save the government after the June 7 elections” and the expression “With the coup of Recep Tayyip Erdoğan and the capital on July 15, 97,000 people were sacked,” which were published in the newspaper, constituted a crime.

Denying the accusations leveled against her, Sarı reportedly said: “Evrensel is a newspaper that has published workers’ letters since its inception. This one that we published is also a worker’s [letter] regarding the referendum on the constitution. That worker politically criticized Erdoğan’s election campaign. [The worker criticized that Erdoğan] took to the streets with the Quran and his stance after July 15. … The fact that all this has not been considered within the scope of press freedom and freedom of expression indicates that judiciary] has been politicized [in Turkey]. This is an attempt to threaten Evrensel and journalism. … We do not accept the message conveyed [to us]. We will continue to support press freedom and our profession and to report the news. We will continue to publish workers’ letters today as we did before. Also, we will object to prison sentences given. We believe our readers will also support us.”

The French-based Reporters without Borders (RSF) also denounced the court’s decision.
In a message posted on its Twitter account, the organization said the fact that Sarı has been convicted is far from democratic order and contemporary law.

According to a report released on April 26 by RSF, the already very low ranking of Turkey in the World Press Freedom Index had further declined to 155.

While evaluating Turkey on its website where it analyses each country with respect to the situation of the media, RSF used the headline “Journalism engulfed by the purge” and said:

“The witchhunt waged by President Recep Tayyip Erdogan’s government against its media critics has come to a head since the abortive coup of July 2016. The authorities have used their fight against “terrorism” as grounds for an unprecedented purge. A state of emergency has allowed them to eliminate dozens of media outlets at the stroke of a pen, reducing pluralism to a handful of low-circulation publications. Dozens of journalists have been imprisoned without trial, turning Turkey into the world’s biggest prison for media personnel. Those still free are exposed to other forms of arbitrary treatment including waves of trials, withdrawal of press cards, cancellation of passports, and seizure of assets. Censorship of online social networks has also reached unprecedented levels.”