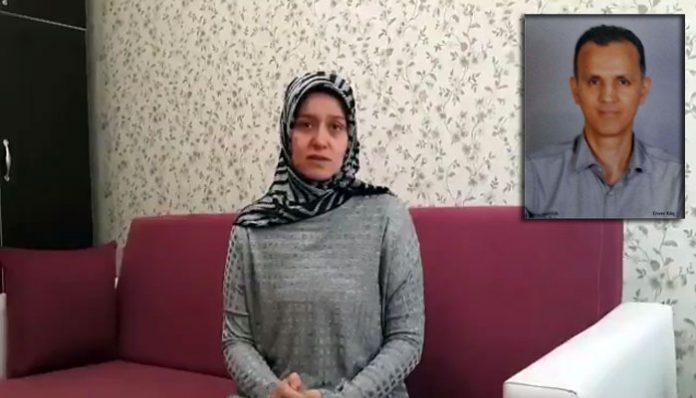 In a video message shared on Monday by @magduriyetlertr on Twitter, Birsen Kılıç stated that her husband, Enver Kılıç, was not allowed to get on a plane in Kazakhstan, from where he was reportedly deported while trying to fly to the Netherlands, allegedly at the order of the Turkish government due to links to the Gülen movement, who the ruling Justice and Development Party (AKP) accuses of plotting an attempted coup on July 15, 2016.

Birsen Kılıç said in the video: “My husband Enver Kılıç went to [Kazakhstan’s capital] Almaty Airport from [Kyrgyzstan’s capital of] Bishkek on Sept 16. He was going to take a flight to the Netherlands from there [Bishkek]. He was unable to board the airplane, told by the staff that there were problems with his documents. His passport was seized. He stayed in a flat he had rented and was free to move about the city. Fifteen days later, on Sept. 30, he had a court hearing. The court ordered his deportation. He went to the airport with his lawyers. The airport staff didn’t permit my husband’s lawyers to accompany him.”

She added: “We waited for my husband in Bishkek. The lawyers said they had seen him getting on board an airplane. But he did not arrive in Bishkek. I haven’t heard from my husband. His lawyers contacted the relevant authorities but to no avail. I’m asking the officials of Kazakhstan and the United Nations: Please help us. I fear for my husband’s life.”

A witch-hunt launched in 2013 in Turkey targeting alleged followers of the Gülen movement in the wake of a massive corruption and bribery scandal of Turkish government ministers and their family members on Dec. 17-25, 2013 has even affected the situation of Turkish citizens abroad.

Turkey survived a military coup attempt on July 15, 2016 that killed 249 people. Immediately after the putsch the ruling AKP government along with President Recep Tayyip Erdoğan pinned the blame on the Gülen movement.

Turkey’s Justice Ministry announced on July 13 that 50,510 people have been arrested and 169,013 have been the subject of legal proceedings on coup charges since the failed coup. Turkish government has also suspended or dismissed more than 150,000 judges, teachers, police and civil servants after the coup attempt.