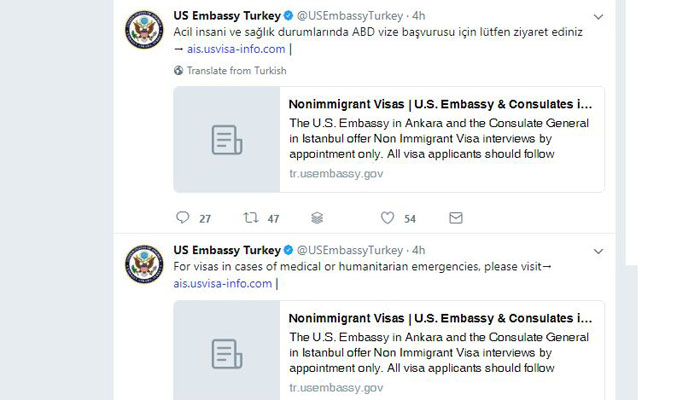 Amid a diplomatic row between Ankara and Washington, the US Embassy resumed visa issuance for emergency health and humanitarian cases while continuing to suspend all other non-immigrant visa services, the Hürriyet daily reported.

After Turkish authorities arrested US Consulate employee Metin Topuz on Oct. 4, the US Embassy in Ankara announced last Sunday that it had suspended all non-immigrant visa services at US missions in Turkey.

Speaking during a press conference with his Serbian counterpart, Aleksandar Vucic, in Belgrade, Turkish President Erdoğan said on Oct. 10 that the US Consulate staff member was a spy and that it was Turkey’s right to take steps against an “internal threat.”

A US diplomatic delegation led by Deputy Assistant Secretary of State for European and Eurasian Affairs Jonathan Cohen arrived in Ankara on Monday in a bid to resolve the diplomatic crisis between the two countries.