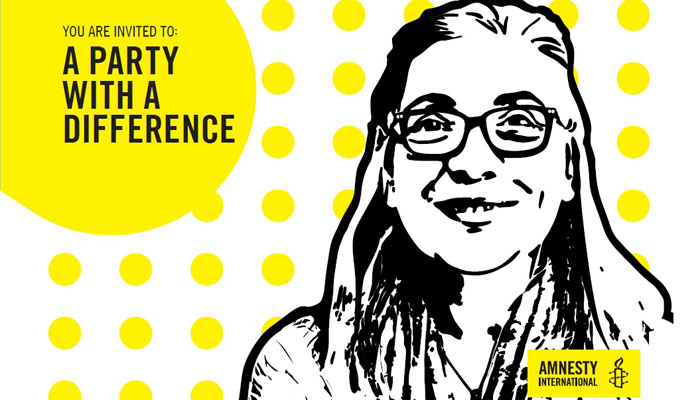 Amnesty International (AI) on Wednesday called on the Turkish government for the immediate and unconditional release of 11 prominent human rights defenders, including its Turkey director İdil Eser, who has been in pretrial detention for 100 days on terrorism charges.

In a press release issued on Wednesday, John Dalhuisen, Amnesty International’s Europe director, said: “One hundred days ago our colleagues were locked up for standing up for human rights. Every passing day further exposes the long reach of the post-coup crackdown and the deep flaws in Turkey’s justice system.”

Underlining that the accusations faced by the 11 activists are baseless, Dalhuisen said: “The indictment is a toxic mix of innuendo and untruth which does not stand up to the slightest scrutiny. It repeats ludicrous and contradictory allegations which have no place in any self-respecting courtroom.”

Ten activists, including Eser, were detained on July 5 during a workshop at a hotel on İstanbul’s Büyükada and were put in pretrial detention by an İstanbul court on July 18 on charges of “abetting a terrorist organization.”

On Oct. 4 a prosecutor filed an indictment calling for jail terms of up to 15 years for all 11 human rights defenders.

AI also announced that its activists in over 25 countries would hold more than 200 parties and stunts to mark Eser‘s birthday. These will range from a birthday party in the European Parliament to a press conference in a makeshift prison in Madrid. Full-size paper cutouts of Eser will be present at these activities to highlight her absence.

The press release also said that together with Amnesty International Italian MEP Pier Antonio Panzeri will host a birthday party for İdil Eser in the European Parliament from 19:30-21:30 on Oct. 17. A protest will also be held outside the Turkish Embassy at 10:30 on the 100 day “anniversary” – Oct. 12.

Dalhuisen concluded the press release by saying: “Rounding up human rights defenders was clearly intended to send a message that dissent will not be tolerated. But the courage of İdil Eser and her colleagues and the support they have garnered around the world has sent a brighter message: that critical voices cannot be silenced. The Turkish authorities must immediately and unconditionally release the imprisoned defenders and end the brutal post-coup crackdown that is ravaging the country.”