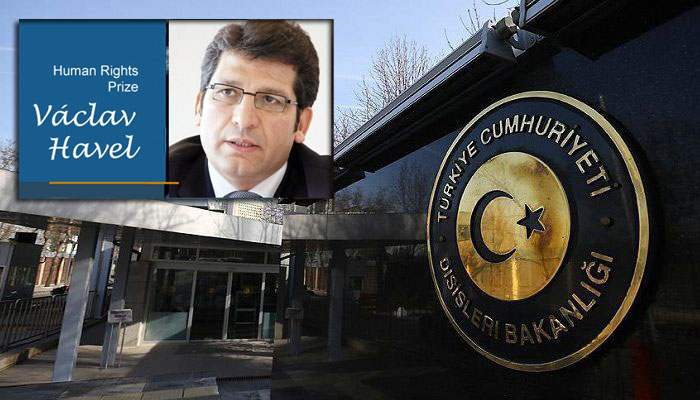 Turkey’s Ministry of Foreign Affairs has slammed the Parliamentary Assembly of the Council of Europe (PACE) for awarding the 2017 Vaclav Havel Human Rights Prize to jailed lawyer Murat Arslan, president of the now dissolved Association for the Union of Judges and Prosecutors (YARSAV), on Monday.

In a statement on its website on Monday, Turkey’s Ministry of Foreign Affairs said: “It is wrong and unacceptable to give the Vaclav Havel Human Rights Prize to a member of the terrorist FETÖ organization, which was behind the July 15 [2016] coup attempt in Turkey.”

Criticizing PACE for presenting Arslan as a defender of human rights despite being a terror suspect in an ongoing trial in Turkey, the statement said such an approach supports environments that encourage and help terror.

“FETÖ,” or the “Fetullahist Terrorist Organization,” is a derogatory term coined by President Recep Tayyip Erdoğan and the ruling Justice and Development Party (AKP) to refer to the faith-based Gülen movement, a global civil society movement inspired by the views of US-based Turkish Islamic scholar Fethullah Gülen, who is accused by the Turkish government of masterminding a failed coup in July 2016.

Earlier on Monday, Arslan was named the winner during the first day of the PACE autumn session.

Arslan, who was detained in Ankara on Oct. 19, 2016 as part of an investigation into the faith-based Gülen movement, was referred to a court by the Ankara Public Prosecutor’s Office and was arrested on Oct. 26, 2016.

Arslan was dismissed from his post at the Court of Accounts in July, 2016 as a result of the probe into the movement.

“I will continue to say ‘Justice for all.’ One day, the rule of law will come to this country,” said Arslan when the prosecutor referred him to court for arrest.

YARSAV was among numerous institutions closed down by the government in the first decree issued in the aftermath of a failed coup attempt on July 15, 2016.

Arslan was nominated as a candidate for the Václav Havel Human Rights Prize by the European-based organization Magistrats Européens pour la Démocratie et les Libertés (MEDEL) in May.

The Václav Havel Human Rights Prize, created in 2013, is awarded each year by PACE, in partnership with the Václav Havel Library and the Charta 77 Foundation, and the support of the Czech government. The prize consists of a sum of €60,000, a trophy and a diploma. The 2016 Prize went to Yazidi human rights activist Nadia Murad.