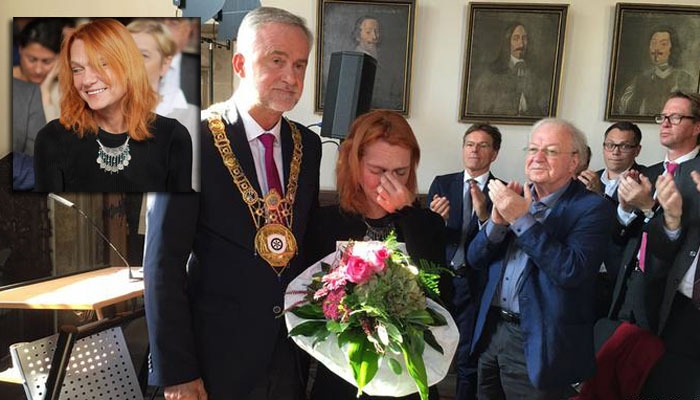 Turkish novelist Aslı Erdoğan, who was released after 132 days in prison due to links to the pro-Kurdish Özgür Gündem daily and recently was given her passport back, on Friday accepted the Erich Maria Remarque peace prize in Germany.

Expressing her happiness at being in Germany for the ceremony, Erdoğan said that “180 writers in Turkey are still in jail and unable to go abroad,” the T24 website reported.

The world-renowned novelist said she had been trying to be the voice of oppressed people her entire life until she herself became on of the oppressed.

Describing the trauma she suffered after being released from jail and the humiliation she experienced there, Erdoğan said she had even thought about committing suicide out of fear of being imprisoned again.

Erdoğan broke into tears as she accepted her prize from Publishers & Booksellers Association CEO Alexander Skipis.

Erdoğan and several other intellectuals, journalists and academics were named in an indictment for serving as editorial board advisers of a pro-Kurdish newspaper. The indictment portrayed Özgür Gündem as a publication of “the terrorist organization,” in reference to the Kurdistan Workers’ Party (PKK).

After her arrest, Erdoğan received several awards from around the world, including the Stuttgart Peace Prize, the Tucholsky Prize and the ECF Princess Margriet Award for Culture. She was unable to travel overseas to accept these awards as Turkish authorities seized her passport as part of a court decision banning her from traveling abroad. Some of them were presented to her in Turkey.