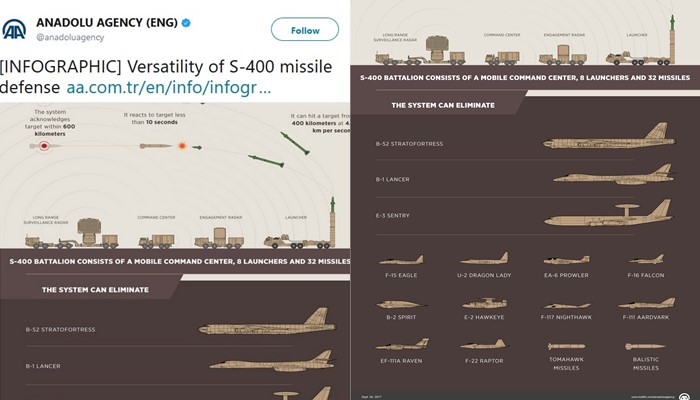 Amid tension between Turkey and NATO over a Turkish decision to buy a Russian S-400 missile system, Turkey’s state-run news agency Anadolu on Wednesday tweeted an infographic depicting the capacity of the S-400 to shoot down US-NATO planes and missiles.

The infographic came a day before a meeting between Turkish President Recep Tayyip Erdoğan and US President Donald Trump in New York on Thurusday.

Ankara has signed a deal with Russia to buy the S-400 missile defense system despite opposition from NATO allies. Erdoğan criticized those questioning Turkey buying a Russian air defense system and suggested Ankara would make its own decisions on what to buy, regardless of NATO’s wishes.

Pentagon spokesman Johnny Michael said that the US has relayed its concerns to Turkish officials over the purchase of an S-400 air defense system from Russia.

According to AFP, Moscow confirmed the agreement, with Vladimir Kozhin, Putin’s adviser for military and technical cooperation, saying, “The contract has been signed and is being prepared for implementation.”