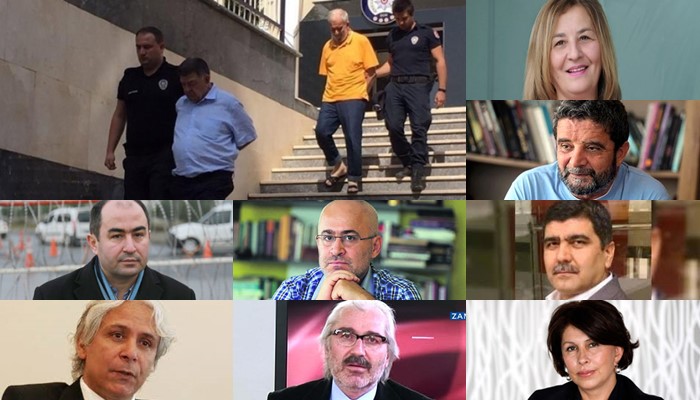 The trial of 30 journalists and newspaper executives from the now-closed Zaman newspaper will start on Monday, with the prosecutor seeking three aggravated life sentences for each of the defendants due to critical articles published in what was once Turkey’s most highly circulated daily, the Stockholm Center for Freedom (SCF) reported on Sunday.

The journalists will be brought to court to face “terrorism” and “coup-plotting” charges after having spent 419 days in detention, a punishment in itself imposed by the government, which blatantly abuses pretrial detention in order to muzzle and intimidate critical, independent opposition voices in Turkey.

The case will be heard by the İstanbul 13th High Criminal Court in the notorious Silivri Prison compound.

The Zaman daily, which was affiliated with faith-based Gülen movement, was first unlawfully seized by the Turkish government on March 4, 2016 and then closed down by government decree in the aftermath of a failed coup attempt on July 15, 2016.

The daily was selling as many as 1.2 million copies a day at its peak and was covering judicial investigations into corruption allegations and illegal arms shipments to jihadists in Syria, which rattled the government of then-Prime Minister and now President Recep Tayyip Erdoğan.

A total of 30 defendants are named in the indictment, 21 of whom are in jail. Mümtaz’er Türköne, Şahin Alpay, Ali Bulaç, Ahmet Metin Sekizkardeş, Ahmet Turan Alkan, Alaattin Güner, Cuma Kaya, Faruk Akkan, Hakan Taşdelen, Hüseyin Belli, Hüseyin Turan, İbrahim Karayeğen, İsmail Küçük, Mehmet Özdemir, Murat Avcıoğlu, Mustafa Ünal, Onur Kutlu, Sedat Yetişkin, Şeref Yılmaz, Yüksel Durgut and Zafer Özsoy have been in pretrial detention for 14 months as the judges repeatedly rejected challenges to their detention despite the fact that there was no reason to keep them in jail pending trial.

Ahmet İrem, Ali Hüseyinçelebi, Süleyman Sargın, Osman Nuri Arslan, Osman Nuri Öztürk, Lalezer Sarıibrahimoğlu, Nuriye Ural and Orhan Kemal Cengiz are also named as suspects in the indictment, but they are being tried without detention. Professor İhsan Duran Dağı, who used to work as a columnist for Zaman, is cited as a fugitive in the indictment.

The formal charges include membership in a “terrorist organization” and “attempting to dissolve the government of the Turkish Republic, or partially or entirely preventing its performance by the use of force or threat.”

İstanbul Public Prosecutor İsmet Bozkurt, who wrote the 64-page indictment, is seeking three consecutive life sentences for the Zaman staff on charges of attempting to overthrow the constitutional order, the Turkish Parliament and the Turkish government and a sentence of between seven-and-a-half and 15 years on charges of membership in an armed terror organization.

The only evidence cited in the indictment as proof of “terrorism and coup plotting charges” are the published op-ed pieces for some and serving as an administrator of the newspaper for others. Articles that commented on major graft investigations that were made public Dec. 17-25, 2013 and that incriminated Erdoğan, his family members and his political and business associates were included in the indictment as criminal evidence and somehow linked to a July 15, 2016 coup attempt in Turkey.

In a bizarre conclusion, the prosecutor said that the articles themselves did not carry any element of crime, yet when considered collectively they must be construed as aiming to overthrowing the government.

For all of the journalists, the indictment claimed they exceeded the limits of press freedom and freedom of expression, violated rights of government officials and state institutions, served the purposes of a terrorist organization, threatened national security, made statements that could have disrupted social harmony and peace and did not hesitate to call for a coup against the government.

As of Sept. 16, 2017, the Stockholm Center for Freedom, a Stockholm-based monitoring and rights advocacy group, had confirmed that 283 journalists and media workers were behind bars in Turkey, a new world record by any measure. Moreover, sweeping detention warrants have been issued for 135 journalists who are forced to live in exile overseas or remain at large in Turkey.