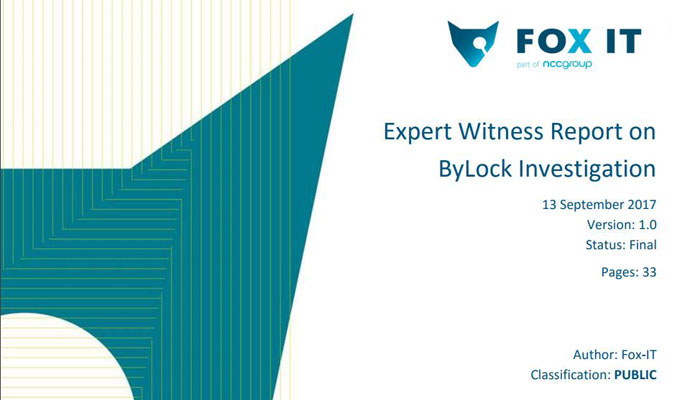 Dutch cyber security firm Fox-IT, known for providing cyber security solutions to governments, said on Wednesday that it had debunked a report by Turkey’s National Intelligence Organization (MİT) on the ByLock smartphone application, which Turkish authorities believe is widely used by followers of the faith-based Gülen movement, as it discovered inconsistencies and manipulations.

In a statement on its website, Fox-IT said the quality of the MİT report on ByLock is very low, especially when weighed against the legal consequences of the report, which is the basis of detention for 75,000 Turkish citizens, mainly sympathizers of the Gülen movement, accused by the Turkish government of being behind a failed coup last year.

“The investigation is fundamentally flawed due to the contradicted and unfounded findings, lack of objectivity and lack of transparency. As a result, the conclusions of the investigation are questionable. Fox-IT recommends to conduct a forensic investigation of ByLock in a more thorough, objective and transparent manner,” the statement said.

On Monday the UK’s Guardian reported that a legal opinion published in London has found that tens of thousands of Turkish citizens detained or dismissed from their jobs on the basis of downloading ByLock have had their human rights violated.

According to The Guardian, a study commissioned by opponents of Turkish President Recep Tayyip Erdoğan and conducted by a pair of 2 Bedford Row attorneys, argues that the arrest of 75,000 suspects primarily because they downloaded the ByLock app is arbitrary and illegal.