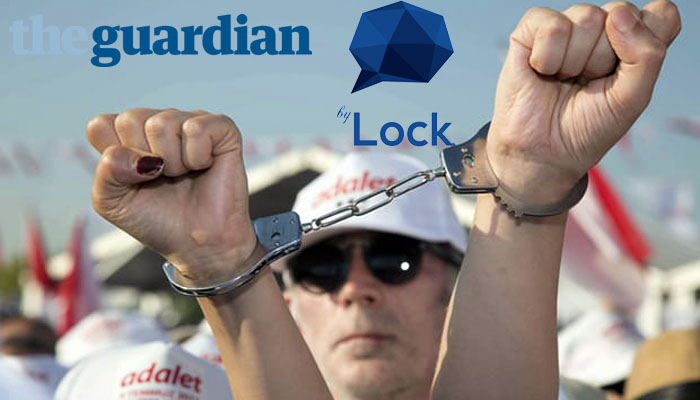 A legal opinion published in London has found that tens of thousands of Turkish citizens detained or dismissed from their jobs on the basis of downloading ByLock, an encrypted messaging app that Turkish authorities believe was widely used as a communication device among followers of the faith-based Gülen movement, have had their human rights breached.

According to a report in the Guardian on Monday, a study commissioned by opponents of Turkish President Recep Tayyip Erdogan and conducted by a pair of 2 Bedford Row attorneys, argues that the arrest of 75,000 suspects primarily because they downloaded the ByLock app is arbitrary and illegal.

Turkish authorities believe that ByLock was used by followers of the Gülen movement, which it accuses of masterminding a failed coup in Turkey last year.

“The evidence that the [ByLock] app was used exclusively by those who were members or supporters of the Gülen movement [is] utterly unconvincing and unsupported by any evidence,” the two barristers said, according to the Guardian. “There is a great deal of evidence … which demonstrates that the app was widely available and used in many different countries, some of which had no links to Turkey.”

The report examines transcripts of recent trials of Gülen followers in Turkey as well as Turkish intelligence reports on ByLock. It concludes that the cases presented so far breach the ECHR, to which Turkey is a party.

The opinion says ByLock was available to everyone, it had been downloaded around the world and was in the top 500 apps in 41 countries. Other “compelling evidence” is required to justify the mass arrests, it said.

“It was downloaded over 600,000 times between April 2014 and April 2016 by users all over the world,” Moore says. “It is, in my opinion, therefore nonsensical to suggest that its availability was restricted to a particular group of people.”

Moore draws attention to a report by the Turkish National Intelligence Organization (MİT), the Turkish intelligence service that had gained access to ByLock communications. “There is no suggestion in the MİT report that downloads were restricted to a territory or jurisdiction.”

None of the cases tried in Turkey have yet been appealed to the European Court of Human Rights, but some are expected to reach Strasbourg eventually.

Taner Kılıç, the head of Amnesty International in Turkey, was charged in June with membership in a terrorist organization and remanded into custody for using ByLock.

The Turkish Embassy in London did not respond to requests for comment on the legal opinion.