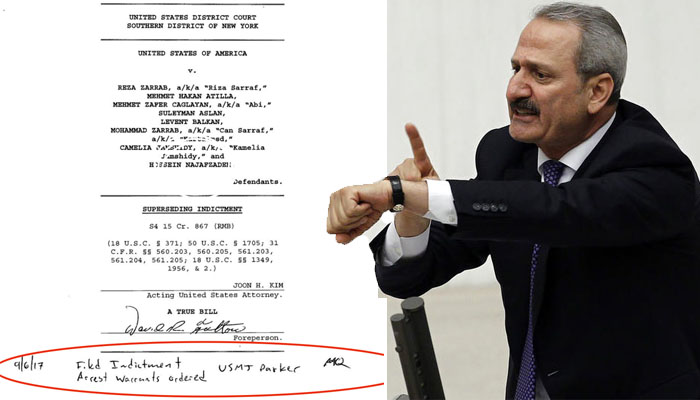 According to a note on an indictment filed on Wednesday, arrest warrants have been ordered from the US District Court for the Southern District of New York for former Turkish Economy Minister Mehmet Zafer Çağlayan, former general manager of state-run Halkbank Süleyman Aslan, the bank’s assistant deputy manager of international banking Levent Balkan and Abdullah Happani, an employee of Iranian gold trader Reza Zarrab.

In the superseding indictment on the US PACER (Public Access to Court Electronic Records) system, a handwritten note dated Sept. 6 saying that arrest warrants had been ordered appears at the end of the document charging four people, including Çağlayan, with conspiring to use the US financial system to conduct hundreds of millions of dollars’ worth of transactions on behalf of the government of Iran and other Iranian entities barred by US sanctions.

The indictment that was filed by Joon H. Kim, the acting US attorney for the Southern District of New York on Wednesday, also charged four defendants with lying to US government officials about those transactions; laundering funds in connection with those transactions including millions of dollars in bribes to Cağlayan and others; and defrauding several financial institutions by concealing the true nature of the transactions.

According to a statement from the US Attorney’s Office on Wednesday, Çağlayan is alleged to have received tens of millions of dollars worth of bribes in cash and jewelry from the proceeds of the scheme to provide services to the government of Iran and to conceal those services from US government officials. Using his position as minister of the economy, Cağlayan directed other members of the scheme, including officers of Halkbank, to engage in certain types of deceptive transactions, approved the steps taken by other members to implement the scheme, and protected the scheme from competitors as well as from scrutiny. As a result, the co-conspirators induced US banks to unknowingly process international financial transactions in violation of sanctions on Iran.

US authorities arrested Zarrab in Miami in March on charges of helping Iran process millions of dollars of transactions when it faced US sanctions for its nuclear program.

Atilla was also arrested in New York City in late March on similar charges to those of Zarrab.

Zarrab was the prime suspect in a graft probe in 2013, along with others from the inner circle of the ruling Justice and Development Party (AKP) government and the then-Prime Minister and present-President Recep Tayyip Erdoğan, for having paid bribes to Cabinet-level officials, including Çağlayan and Halkbank General Manager Aslan, to facilitate transactions benefiting Iran.

Asking the US to reconsider the accusations against the ex-minister, Erdoğan called the steps “purely political” and said, “There are very peculiar smells coming from this.”

“I hope we’ll get a chance to discuss this issue in the United States. You may be a big nation, but being a just nation is something else. Being a just nation requires the legal system to work fairly,” said Erdoğan.