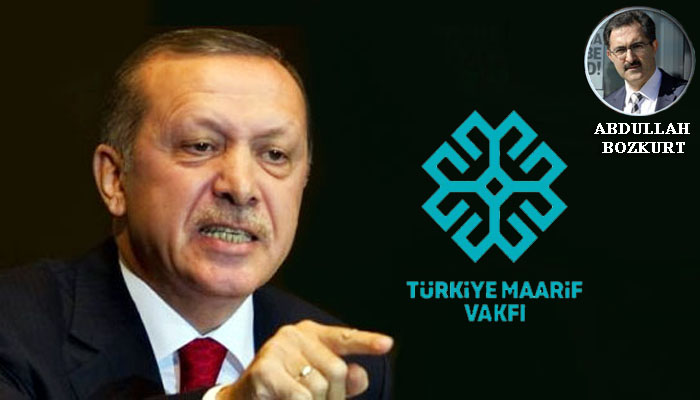 In addition to building mosques and launching cultural centers and development offices that have no real purpose other than the proselytizing efforts of Turkish Islamists, Erdoğan has created a giant educational foundation called Maarif with a special law he pushed through Parliament in June 2016. The funds and resources were generously provided from the Treasury at the expense of taxpayers, while full diplomatic clout was bestowed on the foundation’s chief executives, who apparently have close connections to controversial Islamist groups in Turkey.

Erdoğan posits himself to be the caliph, the leader of all Muslims in the world, and sees the Maarif Foundation as a tool in his investment efforts to reach out to non-Turkish Muslim groups. He hopes that he can raise a generation of loyalists on foreign soil in his endeavor to enlist new recruits. Just like he has diverted billions of dollars that were earmarked for secular public education to religious public and private schools in Turkey, Erdoğan tries to achieve the same abroad by investing heavily in schools, mosques and cultural centers in foreign countries. He personally lobbies for that when he goes abroad during state visits or when he receives heads of government or state at his lavish palace in Ankara.

Defending the bill on the Maarif Foundation in Parliament on June 16, 2016, İsmet Yılmaz, the education minister, emphasized that the foundation was owned by the state and would serve as his ministry’s arm abroad in providing educational services. He described the initiative as proof of the Turkish state’s ambition to project greater power in the world and maintained that Turkey follows in British and American footsteps in that sense. He said the foundation would operate in places from “the Balkans to Eastern Turkistan [China’s Xinjiang Uyghur Autonomous Region] and from Somalia to Canada.”

Article 1 of Law No. 6721, which established the Maarif Foundation, set its goals as providing educational services from K to 12 and beyond, to include university education. It will set up schools, educational institutions and dormitories while training staff, conducting research and releasing publications. The opposition parties criticized the bill by saying that educators and teachers can only be trained by universities and the Ministry of Education according to the established rules and laws in effect. The government overstepped its authority by providing the foundation the right to educate and train its own staff, the opposition lawmakers contended. They also objected to the rule that the foundation was allowed to generate its own content for education and training when in fact it should be implementing policies set up by the Education Ministry.

The strange part of the bill was that it did not set a specific budget or spending threshold for Maarif but instead said the expenses would be covered from the general budget as well as by allocations from the budget of other public institutions. The Cabinet was to decide how much money to give and from where. The government-endorsed bill already gave seed money of TL 1 million upfront for the establishment of the foundation from the budget of the Education Ministry but left the total budget to be earmarked for it as unspecified. More money poured in to the foundation later on. For example, on Nov. 3, 2016, the Cabinet decided to take TL 90 million ($26.2 million) out of the Education Ministry’s budget to be given to Maarif. On July 3, 2017, the Cabinet allocated TL 241 million ($70.2 million) to Maarif, again from the ministry’s budget.

The bill said real estate owned by the government could also be handed over the foundation without any payment, fees or taxes. It could receive all sorts of funds including grants from national and international donors. In fact, during a visit by Turkish minister Lütfi Elvan to Saudi Arabia, Majid bin Abdullah Al Qasabi, the Saudi minister of commerce and investment, and Ahmet Tıktık, vice president of the Islamic Development Bank (IDB), reportedly pledged to provide funds to Maarif to build schools abroad. This means creeping Salafist teachings will make their way abroad through a Turkish government foundation.

Turkish law also says Maarif can take over properties owned by the Turkish government abroad. This means the Ministry of Education will likely cede control of 65 schools in 15 countries that mainly serve the families of embassy and consular staff as well as Turkish diaspora communities to the Maarif Foundation. Currently some 14,219 students are enrolled these schools, which employ 680 Turkish teachers. This provision was later amended to require permission from the minister of education before handover.

The management structure of Maarif is entirely controlled by President Erdoğan, who has the power to appoint four members of the 12-member board of trustees, the executive decision-making body of Maarif, directly, and three members thorough the Cabinet, which he chairs. These seven members are considered to be standing members while the rest were described as representatives who will be selected from the ministries of foreign affairs and finance as well as the Higher Educational Board (YÖK). In other words, Erdoğan not only appoints key members to the board but also reduces the profile of bureaucrats who will represent relevant public institutions on the board. The seven members also form the board of directors, which manages the daily business of the foundation.

On Sept. 1, 2016, as expected, Erdoğan appointed all loyalists to the foundation. Ayşen Gürcan, Birol Akgün, Cahit Bağcı and Selim Cerrah were selected directly, while the Cabinet Erdoğan chairs named Aşkın Asan, Ahmet Emre Bilgili and Osman Nuri Kabaktepe as standing members on the board of trustees. Akgün was named president of the board, while Kabaktepe serves as the deputy president of Maarif. The common characteristic of these people is that they share a common profile that is rooted in political Islamist ideology. Akgün is an Islamist academic who gets invited to dine with President Erdoğan along with other loyalist academics. He claimed the UK supports the Islamic State in Iraq and the Levant (ISIL) in the Middle East and accused Israel of deliberately killing children to hide major losses among elite forces at the hands of Hamas militants.

Kabaktepe, deputy president of Maarif, is perhaps the most controversial Islamist member of the foundation. He has served on the board of the Foundation for Human Rights and Freedoms and Humanitarian Relief (İnsan Hak ve Hürriyetleri ve İnsani Yardım Vakfı, or IHH in Turkish), a pro-government charity organization that was accused of arms smuggling to jihadist groups in Syria according to United Nations Security Council documents. The IHH was also involved in moving supplies to al-Qaeda groups in Syria according to the two-year long confidential investigation file that was made public in January 2014.

Ayşen Gürcan, a former minister who downplayed heinous murders by ISIL in her tweets, saying that no one should take footage or pictures of ISIL’s beheadings seriously just because the West wants them to. Gürcan was the subject of another controversy when she posted demeaning messages on women’s rights in Turkey. Selim Cerrah, another Islamist who worked for the expansion of new religious schools in and around the Turkish capital, is an advisor in the Ministry of the Youth and Sports. He served at religion-based NGOs in the past and worked with Erdoğan’s chief advisor Mustafa Varank in shoring up support for Erdoğan after the emergence of corruption scandals that incriminated then-Prime Minister and now President Erdoğan in billions of dollars in kickbacks and bribes. Other members have a similar background that makes the top management of Maarif composed of Islamist thugs who want to export Erdoğan’s vision abroad.

Maarif’s board is given a free hand in developing policies, establishing companies abroad, entering into shareholder agreements, building schools and managing funds, including determining the salaries of the top administration and employees. Main opposition Republican People’s Party (CHP) lawmaker Gaye Usluer petitioned three times under the right to information about the government but failed to receive a substantive response that shed light on how much money in total the board members are receiving.

Article 4 of the law on Maarif also granted administrators of the foundation the right to carry diplomatic passports and provided them with rights and privileges equivalent to a diplomatic attaché. Since they can serve until the age of 72, these Islamist operatives can freely travel all over the world under diplomatic cover. The teachers and school principals employed by Maarif will be treated as government officials who are tasked with overseas assignments and will benefit from all privileges awarded to such officials under Turkish passport law.

On Oct. 29, 2016 the government issued decree-law No. 676, which amended some of the provisions of law on the Maarif Foundation and expanded its powers. The changes allowed the foundation to hire civil servants and academics from state-run universities for two years with an option to extend their tenure twice for another two years on each renewal. Such personnel will be considered to be on paid leave while receiving additional income from the assignment with Maarif overseas.

The employees hired by Maarif for overseas assignments were reported to be shady characters with questionable track records. For example, Maarif appointed a controversial educator as principal to its first state-run school abroad that was set up in Georgia’s coastal city of Batumi in September 2016. The principal, Mehmet Kabakci, worked at Adiyaman religious vocational school IHL, where dozens of rape and child molestation cases were hushed up under his watch. The scandal involved as many as 30 children over a two-year period. Kabakci was reassigned to another school and later appointed to the Maarif-run school in Batumi as a reward for sweeping the dirt under the carpet. Maarif plans to open more schools abroad. It has already established one in the town of Clifton in the US state of New Jersey under the name of the Miraj Academy.

The Erdoğan government has been trying to pressure foreign governments to hand over schools affiliated with his arch-foe, Fethullah Gülen, who lives in the US. Gülen is highly critical of Erdoğan on pervasive corruption, the government’s aiding and abetting of armed jihadist groups in Syria and the president’s exploitation of religion to advance his political goals. Sometimes by offering money, aid, trade and investment and other times with outright threats, Erdoğan strong-armed some weak governments in Africa such as in Somalia to seize and hand over Gülen schools. Most governments, however, balked at the idea and rebuffed the blatant interference into their own internal affairs.

Turkey’s Maarif Foundation is on its way to becoming a nexus of Erdoğan’s ambition to export his brand of a special blend of Islamist ideology, one that is polarizing, threatening and hostile. Even reviewing the profiles of its top management is enough to conclude that this initiative may very well be aiming to destabilize other nations despite the appearance of subtlety at face value. It must be monitored and scrutinized closely and thwarted early on before it gets a chance to morph into something awful at the hands of the 21st century European Islamist dictator.