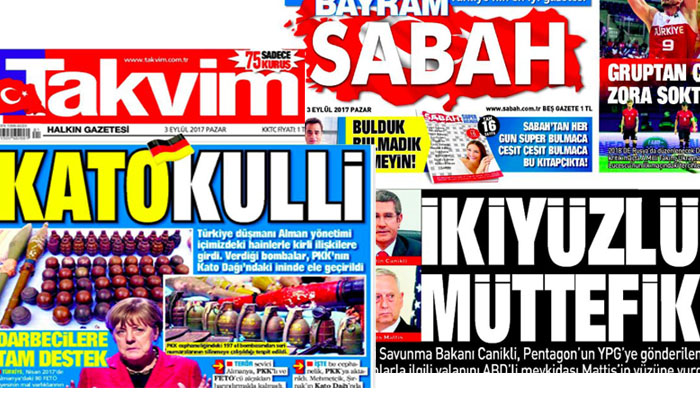 Turkey’s Sabah and Takvim dailies, once managed by Turkish President Recep Tayyip Erdoğan’s son-in-law and Turkish Energy Minister Berat Albayrak, targeted the German and US governments on their front pages on Sunday, claiming “the so-called NATO allies support terror groups against Turkey,” including the outlawed Kurdistan Workers’ Party (PKK) and the faith-based Gülen movement, which is accused by the government of masterminding a failed coup last year.

In a front page report on Sunday, Sabah claimed that weapons provided by Germany and the US to the People’s Protection Units (YPG) in the fight against the terrorist Islamic State in Iraq and the Levant (ISIL) in Syria were seized from PKK militants during terror attacks on security forces in Turkey.

Most recently, Turkish security forces found German-made grenades and ammunition hidden in PKK caves during operations from July 30 to Aug. 5 on Kato Mountain in Şırnak province.

Sabah also claimed that Turkish Defense Minister Nurettin Canikli taunted his US counterpart, James Mattis, during a visit to Turkey on Aug. 23, over US support for the YPG in Syria.

Sabah’s sister daily Takvim also targeted the German and US governments, saying both Washington and Berlin were supporting terror groups against Turkey.

According to a Takvim report on Sunday, Germany not only provided weapons to the PKK and YPG but also had become a safe haven for sympathizers of the PKK and Gülen movement in the EU.

Turkey considers the YPG a terrorist group and an offshoot of the PKK in Syria, while the US-led coalition against ISIL support the YPG and its political wing, the Kurdish Democratic Party (PYD), in the fight against ISIL.

Turkey’s relations with many Western governments, including Washington and Berlin, have already been strained due to Erdoğan’s crackdown on opposition groups and the violation of the human rights of dissenters, especially after the failed coup on July 15, 2016.