[OPINION] Turkey is now a rogue intelligence state under Erdoğan 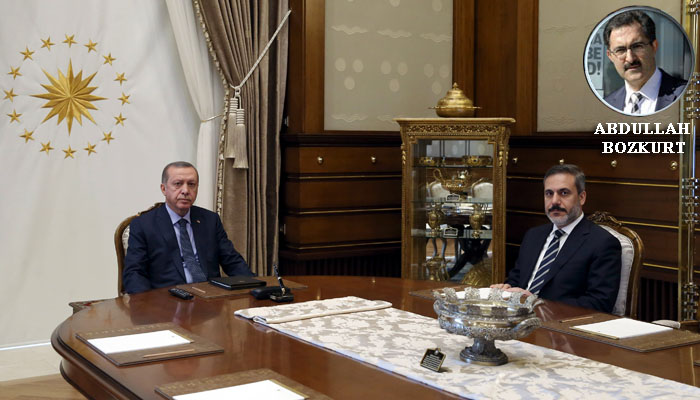 The sweeping changes to the intelligence law with the latest government decree that bypassed Parliament and avoided public debate cause one to conclude that Turkey under the regime of the authoritarian leadership of Recep Tayyip Erdoğan has officially moved to a rogue police and intelligence state, one that is a hostile, insular, irredentist and irrational actor in world politics.

The restructuring the notorious intelligence agency, the National Intelligence Organization (MİT), and its formal integration with President Erdoğan’s office under blanket immunities and new powers confirmed the view that the most important challenge for Turkish democracy will be tackling the clandestine business schemes Turkish Islamists have been plotting through secretive intel services. From keeping the judiciary on a tight leash to achieving strict control over civil society, from running a propaganda machine to muzzling critical media, Erdoğan has been using MİT, led by his confidante Hakan Fidan, to fulfill his ambitions in Turkey and beyond. He manipulates the Turkish media through propagandists who are on the payroll of MİT and blackmails and threatens his opponents with plots cooked up by MİT.

Law-decree No.694, which was approved by the Cabinet on Aug. 15, 2017 and published in the Official Gazette 10 days later, builds upon already rushed prior amendments to the intelligence law that were made when Erdoğan was caught red-handed unlawfully shipping heavy arms and ammunition to jihadists in Syria in January 2014. Both changes back in 2014 and new ones that were enacted in August clearly defy benchmarks set by the Venice Commission of the Council of Europe that laid out the rules in an excellent analytical piece titled “Report on the Democratic Oversight of the Security Services” in June 2007, updated in April 2015. The overriding theme of the commission’s report is that control of the intelligence community by the courts, legislative branch and independent and expert bodies is essential for the functioning of a democracy based on the rule of law.

Below is a review of some of the most serious changes made to Turkish laws on how Turkish intelligence should operate, its mandate and what rules and procedures shall apply when it comes to accountability, if any. It makes a case of how Turkish democracy has been transformed into an autocratic, intelligence-run state rooted in Islamic zealotry and xenophobic euphoria.

The amendment to the 1970 Law No.1325, which regulates the mandate of the Ministry of Defense, stated that MİT would be responsible for intelligence gathering on all defense personnel as well as officers in the armed forces. The amendment sidelines military intelligence and paves the way for MİT to spy on the Turkish military both on and off base. This is quite a departure and dramatic change. What is more, the regulations allowing MİT to collect information on the military and its personnel will be drafted by MİT itself and be approved by Erdoğan personally. In other words, Turkey’s spy agency is also empowered with a new mandate to institute secondary legislative changes on its own without even bothering with the involvement of NATO’s second largest army, which will be impacted directly by the process.

Given the fact that MİT chief Fidan is believed to be a mole for the Iranian Revolutionary Guards Corps (IRGC) as the hushed-up investigation by police intelligence into IRGC’s Quds Force activities in Turkey exposed in 2014, an agency that is under the influence of Iran would be tapping into NATO’s pool of shared intelligence without any checks or hindrance. The 2014 probe into Iran’s spy network and its clandestine activities in Turkey revealed how Fidan was passing information to Quds Force generals, using MİT’s private plane to fly Iranian generals between Tehran and Ankara. A leaked confidential US National Security Agency (NSA) document dated April 13, 2013 revealed that the US had been concerned about Fidan’s Iranian connections based on a flurry of US intelligence reporting in recent years indicating that connection.

The second change, to Law No. 2937 — which regulates the activities of the spy agency MİT – put the agency directly under the control of President Erdoğan as opposed to the prime minister. Although it was Erdoğan who was already calling the shots in commanding the spy agency, albeit unlawfully because of the low-key profile of Prime Minister Binali Yıldırım, the Turkish president made it official with this change and did not leave it to chance in the event an underdog might replace Yıldırım down the road. The law in its new form clearly rules out any responsibility of the spy agency to anybody or any institution other the president himself, dealing a blow to the critical parliamentary and judicial oversight role over MİT.

Another change was accomplished through an amendment to Law No. 2918 on Motorways Traffic, putting MİT in full control of motor vehicle registration and inspections for its own fleet, able to hide its vehicles as it wishes and run emission inspections without the review of any other agency that deals with traffic and vehicle registration. This would effectively allow the spy agency to falsify the records without anybody knowing and claim a vehicle as its own when in fact it is registered to others and contractors. Just as in the case of illegal arms shipments that were escorted on rented trucks in January 2014, MİT can provide full immunity for any vehicle from any lawful search, seizure or investigation by claiming it belongs to the agency.

Erdoğan also established a new board called the Milli İstihbarat Koordinasyon Kurulu (MİKK, or National Intelligence Coordination Board) to consolidate all intelligence in his lavish palace where he runs the operations directly. The board would shape the fundamental policies in steering intelligence activity among various agencies, and it will be MİT that will take care of the secretariat work of this new board. This means Erdoğan will frame the underlying themes of intelligence gathering and targeting from his office and impose the terms of what he considers a threat to his rule as a straightjacket mandate to all intelligence agencies in Turkey. The law-decree does not say who the members of the board will be but notes that the implementing law on how the board will operate will be determined by Erdoğan’s government without the involvement of Parliament.

The amendment to Article 8 of Law No. 2937 leaves the Cabinet out in the cold during emergency rule and wartime mobilization, entrusting the power to manage how MİT will handle its relations with other government agencies in the hands of President Erdoğan, who would draft regulations as he wishes after seeking the opinion of the National Security Council (MGK). The Cabinet is removed from providing any input in this process. The change to Article 11 of the intelligence law gives a free hand to MİT in enlisting any military officer as a spy without bothering to seek permission from the Turkish Armed Forces, as opposed to the requirements of the 1967 Law No. 926 on Military Personnel.

A new addition to Article 26 requires Erdoğan’s permission to investigate MİT Undersecretary Fidan, providing him with full-clad immunity from any prosecution as long as he keeps doing the dirty bidding of his boss. The addition also empowers the Turkish president to swap or hand over prisoners of foreign nationals with a request initiated by the foreign or justice ministries, which are led by his lackeys Mevlüt Çavuşoğlu and Abdülhamit Gül, respectively. Even in cases where the MİT chief is summoned to testify as a “witness,” Erdoğan’s permission is required. Prosecutors must secure the permission of the intel chief to ask any intelligence officer to testify in court.

As far as freedom of the press is concerned, the most lethal blow dealt to the free, independent and critical media in Turkey, or what is left of it, anyway, is the new wording that was added to Article 27 of the intelligence law. According to the revamped version of the law, those who disclose MİT members’ identities, positions or duties in any way will face up to seven years’ jail time. This is a warning shot to investigative journalists who might expose MİT’s dirty schemes and reveal the people involved in those plots.

The provision is valid not only for intelligence officers on the payroll of MİT, but in fact anybody who is tasked by the president to carry out a covert operation is shielded by this protection that carries jail time for offenders. For example, when Erdoğan sent operatives to Germany to spy on his critics and plot schemes on foreign soil, Turkish reporters would not have been able to write about it even if it was exposed and covered widely in the German media, as happened in the case of Erdoğan’s personal aide, Muhammed Taha Gergerlioğlu, and other operatives who were detained in 2015 on espionage charges in Germany. Those who expose MİT officers aiding and abetting jihadists including the Islamic State in Iraq and the Levant (ISIL) will risk jail time according to this new law.

It is clear that Turkey’s strongman wants to govern Turkey through an intelligence organization that he has turned into his private detective agency in cooking up plots and organizing dirty schemes to sustain his rule even if that costs the lives of innocent people in false flag operations. Commenting on these new changes contained in the law-decree, Erdoğan said on Aug. 28, 2017 that “our intelligence agency should also continue to become stronger. In fact, when I think about the intelligence agency from 15 years ago and look at the current one, I see that we’ve made great progress.” He claimed that MİT has now developed important assets in the West and in Muslim countries. “MİT is also taking further steps in humanitarian and technical intelligence, and we have an intelligence agency that is taking steps in becoming a determinative power in the region,” he said. Erdoğan was boasting about assets in the new portfolio of MİT, hinting at his investments in proxy groups in other countries.

MİT’s leveraging of jihadists who have found their way to Syria for years since 2011 is now working the other way around, threatening countries from where foreign fighters have descended on Syria. ISIL attackers from Paris to Brussels, from St. Petersburg to Stockholm, had mysteriously managed to come to Turkey and spend some time under the watch of Turkish intelligence, which aided and abetted their movement through Turkey. The massive profiling and espionage activities by MİT and its proxies of Erdoğan’s critics are still going on in many European countries, while efforts are under way to continue mobilizing diaspora Turkish and Muslim groups on behalf of Erdoğan’s political goals with the help of MİT. Just like communist-era state intelligence services, Turkish intelligence agency MİT under Erdoğan and his thugs should be considered a hostile spy agency that presents a national security risk for other countries. It has to be contained, neutralized and thwarted by policy actions as well as by legal cases.