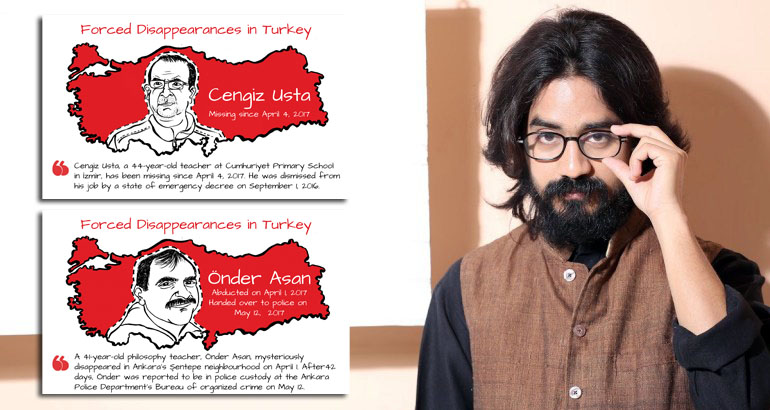 Aseem Trivedi, an Indian free speech activist and cartoonist, has drawn cartoons of 13 Turkish citizens who have allegedly been abducted or disappeared after a coup attempt on July 15, 2016 in Turkey.

The cartoons were published in “Black & White – Online Cartoon Magazine for Human Rights” on Aug. 30 to attract attention to the forced disappearances and massive human rights violations in Turkey and to show solidarity with the victims of an ongoing purge by the Turkish government.

In a written statement on his website, the cartoonist also called on people to raise their voices for the missing people in Turkey.

“On this ‘International day of the victims of enforced disappearances’ (August 30), let’s raise our voices for the missing people of Turkey. In the aftermath of the coup attempt last year, at least thirteen people have been abducted allegedly by elements linked to the Turkish government as part of an intimidation campaign targeting critics and opponents of Turkey’s president,” Trivedi stated.

Turkey survived a military coup attempt last July that killed 249 people and wounded more than a thousand others. Immediately after the putsch, the Justice and Development Party (AKP) government along with President Recep Tayyip Erdoğan pinned the blame on the Gülen movement, led by US-based Turkish Islamic cleric Fethullah Gülen. The group denies the accusations.

Hundreds of human tragedies in Turkey have been reported since then.

As a reaction to these tragedies, Trivedi previously drew the cartoons of 15 mothers and their newborn babies who have been detained or arrested by the Turkish government on coup charges either when they were pregnant or shortly after giving birth.

Triverdi released the cartoons with a note that read: “Turkish government has systematically been detaining women on coup charges either when they are pregnant or shortly after giving birth. At least 16 cases have so far been reported.”

Turkish officials have systematically been detaining women over alleged links to the Gülen movement either when they are pregnant or shortly after giving birth.

In June, teacher Esra Demir was detained a day after giving birth in Batman.

In May, Aysun Aydemir, an English teacher who gave birth to a baby by cesarean procedure, was detained at the hospital for links to the Gülen movement and subsequently arrested by a court and put in pretrial detention with a three-day-old baby in Zonguldak province.

A day after Ş.A. was taken into police custody, another mother known as Meryem gave birth to twins by C-section at a hospital in Konya and was detained by police despite doctors’ reports that she should not travel and was taken to Aksaray from Konya in a police car.

A total of 138,148 people have been dismissed from their jobs, 118,235 detained and 55,927 arrested as part of a government crackdown following the failed coup last summer, a tally by TurkeyPurge.com said. (Turkey Purge) 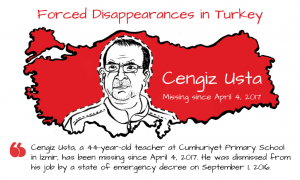 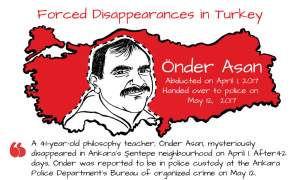