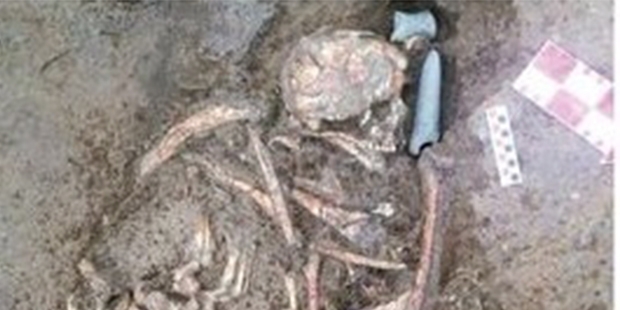 A skeleton buried with an axe was among the findings of Neolithic ruins dating as far back as 6,000 years that were discovered during construction for a metro station in the Beşiktaş district of İstanbul.

The announcement came from the Istanbul Museum of Archeology, according to the Hurriyet daily on Friday. It is believed that burial with war tools was a tradition of the era.

The ruins in İstanbul’s Bosporus area were reported to be the first dating to the Neolithic period and found to be significant in terms of illuminating its history. The gap between 6500 and 3000 BC in İstanbul is thought to be filled by the Beşiktaş find. As the excavations progress, significant findings dating back to the prehistoric age are likely to emerge.

During archeological excavations, graves similar to the ones discovered in the Yenikapı district were found.

Neolithic age expert Professor Mehmet Özdoğan said there was a gap in İstanbul’s history after the findings in Yenikapı and that this gap would be filled with the findings from Beşiktaş.

“It is an amazing discovery that this is in the center of İstanbul, in Beşiktaş. The circular constructions in the area are typical of Thracian settlements. We see these until the the Iron Age. I am predicting that these findings date back to 4000 BC. As findings are unearthed, the dating will become more precise,” said Özdoğan.

Archeologist Nezih Başgelen said the Beşiktaş metro excavations are significant since no prehistoric settlement ruins were found in the area of the Bosporus, an important waterway. According to Başgelen, these findings can help to fill the gaps between the Mesolithic and Bronze ages.