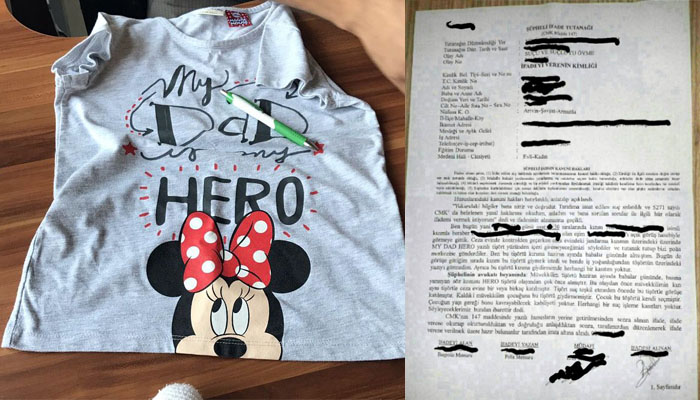 A Turkish girl and her mother were briefly detained for the former’s “hero” T-shirt during their visit to the child’s jailed father during a prison visit.

According to a Twitter account that claims to be the mother’s lawyer, the two were denied entrance to the prison due to the T-shirt the girl was wearing, and gendarmes took both to a police station from where they were later released.

“My phone rang. My client told me in tears that she had been detained along with her daughter. What happened, I asked her. She said, ‘I can’t talk, please come over.’ and this was what happened,” the lawyer tweeted. The details regarding the incident and identities of the accused parties were kept anonymous by the Twitter account.

The T-shirts bearing the word “hero” became a contentious issue when Gökhan Güçlü, one of the suspects on trial for an assassination attempt against President Recep Tayyip Erdoğan on the night of the July 15, 2016 failed coup, was thrown out of the courtroom for wearing a T-shirt bearing the word “hero” because it caused tension between the parties during the hearing. At least 37 people have been detained for wearing hero T-shirts since the middle of July.

“MY DAD HERO,” the girl’s T-shirt read. Her mother said during her interrogation that the T-shirt was bought months ago. (Turkey Purge)