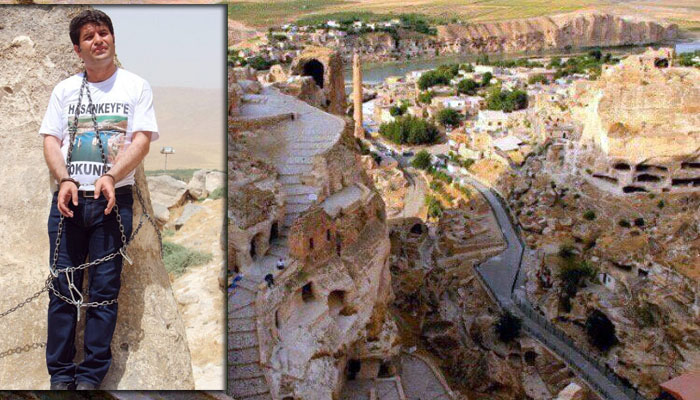 Underlining that he canceled his Hajj pilgrimage preparations and came to Hasankeyf after seeing destructions with dynamites in social media, Aslan said the destruction of Hasankeyf is not different from Al-Qaeda’s destruction of Buddhas of Bamian in Afghanistan and Islamic State of Iraq and the Levant (ISIL) destruction of Palmyra in Syria.

“I will continue my protest until the problem is solved. I wish AKP (ruling Justice and Development Party), CHP (main opposition Republican People’s Party), MHP (Nationalist Movement Party) and HÜDA-PAR (pro-Kurdish Free Cause Party) also support me. Hasankeyf is a common inheritance for all of us. It is a world heritage,” he said.

Civilized life in the antique town of Hasankeyf dates back to 8th century B.C. and the drawings inside the caves scattered around the town shed light on different periods, cultures and architectures of humanity. It is home to evidences on the roots of human species, the beginning of agriculture, and the beginning of civilization. The nearly 6 thousand caves around the antique town are one of the first sites of human settlement.

A video shared in social media among Turkish users show that some of the caves were dynamited during the construction of Ilısu dam which will flood Hasankeyf town.

There are more than 300 archaeological sites within a 7 thousand hectares of land where the town settled. 83 of these sites are directly affected by the dam, and the others are susceptible to the dam’s erosion affect.