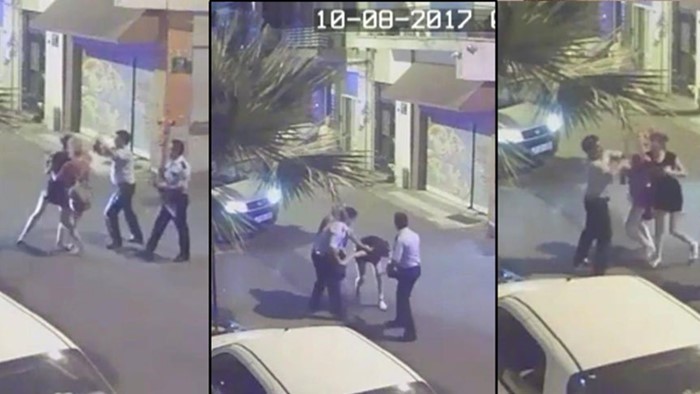 İzmir Police Chief Hüseyin Aşkın announced that an investigation has been launched into two police officers captured on surveillance footage battering two women who were seeking their help with a harassment incident, Cumhuriyet reported on Sunday.

Claiming that they had been sexually harassed by two youngsters on motorbikes, the women, identified only by the initials D. and S., reportedly asked for help from the police officers.

However, a quarrel erupted and, according to the surveillance footage, the two women were battered by the police officers, who reportedly accused them of dressing “inconveniently.”

The two women filed a complaint about the officers and told Turkish media on Saturday that “we wanted help from them because we couldn’t see the license plates of the harassers’ motorbikes. But the police officers said the harassers did it right, saying that we were dressed ‘inconveniently’.”

According to a statement released by the İzmir Police Department on Saturday, an investigation has been launched into the incident.

“As soon as we were informed about the incident, we started an investigation into our staff. The police department is an organization that attaches importance to relations with the people. If our staff was in the wrong, legal sanctions will be imposed on them. Every aspect of the incident is being investigated to reveal the truth. The investigation was launched immediately,” Chief of Police Aşkın said.