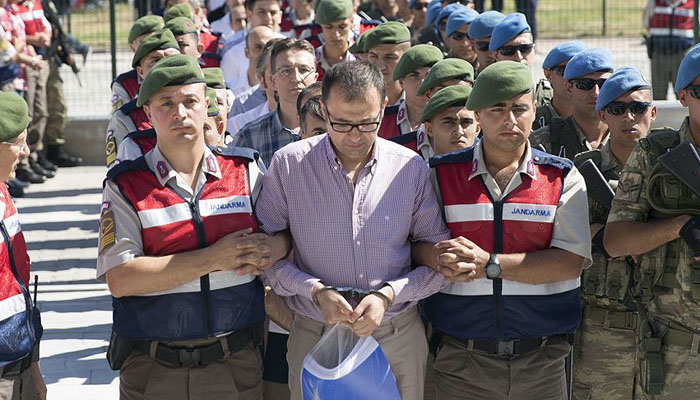 Hakan Çiçek, a defendant in a trial of suspects accused of taking part in a failed coup in 2016, said on Thursday that he was invited to Akıncı Airbase by a commander to attend happy hour while putschist soldiers attempted to overthrow the government and president.

Speaking during a hearing at the Ankara 4th High Criminal Court on Thursday, Çiçek denied links with the Gülen movement, which is accused by Turkish authorities of being behind the coup attempt.

According to the Hürriyet Daily News, Çiçek said: “I saw planes taking off and I was scared. I was invited to the base by a commander to attend happy hour. I haven’t even seen the place where the coup attempt took place.”

While condemning the putschist soldiers, Çiçek underlined his support for President Recep Tayyip Erdoğan and the government, saying, “I genuinely believe that this attempt was stopped by our honorable president’s strong stance and the Turkish nation standing against the tanks.”

Çiçek, who is a businessman and the owner of a college in Ankara, is accused of being in contact with army officers to transfer instructions from Fethullah Gülen, whose views inspired the movement, to plot the coup.

Çiçek was detained along with other suspects Nurettin Oruç, Kemal Batmaz, Harun Biniş and Adil Öksüz near Akıncı Airbase in Ankara on the morning of July 16, 2016, a day after the coup attempt. While Çiçek, Batmaz and Biniş were put in pretrial detention, Öksüz was released and is now at large.

A total of 486 people accused of taking part in the coup attempt are standing trial. The suspects, who were thought to have received orders from Akıncı Airbase, were allegedly plotting to assassinate Erdoğan on the night of the coup attempt.