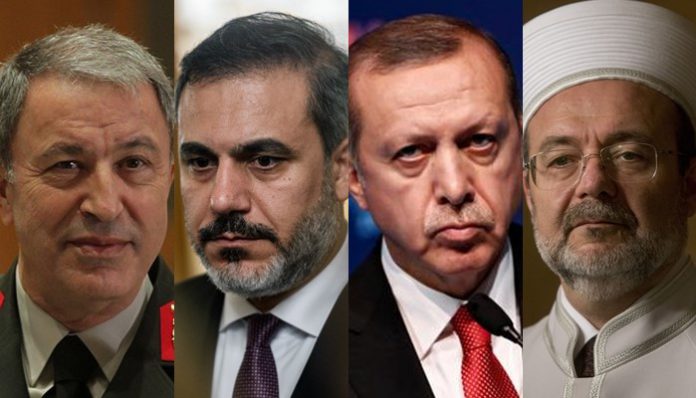 A new revelation about a meeting between Mehmet Görmez, the director of Turkey’s Religious Affairs Directorate (Diyanet), and Hakan Fidan, National Intelligence Organization (MİT) undersecretary, during a coup attempt on July 15, 2016 has added another question mark about what happened before and after the failed coup.

According to a column written by Abdukadir Selvi in the Hürriyet daily on Thursday, MİT’s Fidan was having dinner with Diyanet’s Görmez and Syrian religious leader Muaz El Hatib at MİT headquarters in Ankara at 22.00. Saying he could not wait until the end of the dinner due to an important notification, Fidan left the table after a message was forwarded to him. Görmez learned about the coup attempt when his wife called him while he was at MİT headquarters.

An official statement and testimonies show that a major informed MİT about the coup plan at 14:00 and that Fidan went to military headquarters to speak with Chief of General Staff  Gen. Hulusi Akar. Fidan left at 20:30, about half an hour before the coup attempt was launched.

“At 14:30 I told two persons that ‘a helicopter will take [MİT Undersecretary] Hakan Fidan. I do not know what the other helicopters will do.’ They asked me what that could mean. I told them this could be a big activity, even a coup attempt,” Maj. O.K. said in testimony to a prosecutor on Aug. 11, 2016.

The new revelation about the meeting has fueled another debate over the coup attempt. Many prominent social media users have asked why the intel chief did not cancel the dinner despite the fact that he received information about a coup attempt, while others question whether the meeting was for preparing mosques to recite the salah prayer to call people to the streets when the coup attempt started.

Testimonies show MİT’s Fidan had an unusual meeting that lasted about six hours with Gen. Akar and Special Forces Commander Lt. Gen. Zekai Aksakallı a day before the coup attempt in Ankara during a ceremony that would normally would have taken place on July 15 but was unexpectedly moved to July 14.

President Recep Tayyip Erdoğan and Prime Minister Binali Yıldırım having expressed uneasiness with Fidan and Akar for failing to inform them about a coup attempt on July 15 and the fact that they had learned of the coup plan about seven hours earlier notwithstanding, the two retained their posts, while over 150,000 people from state institutions were purged and jailed by the government after the coup attempt.

The military coup attempt on July 15 killed 249 people and wounded more than a thousand others. Immediately after the putsch, the Justice and Development Party (AKP) government along with President Erdoğan pinned the blame on the Gülen movement.