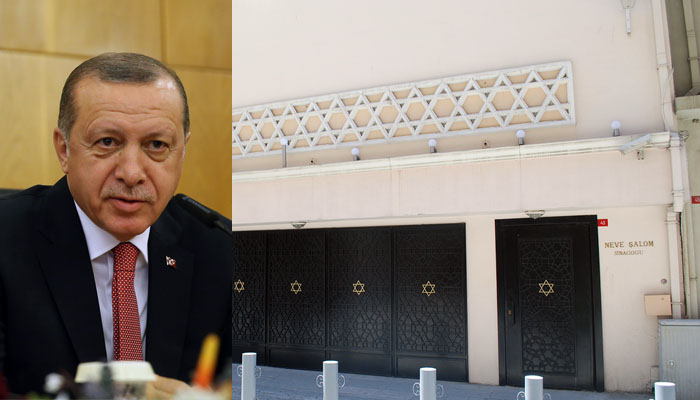 Turkish President Recep Tayyip Erdoğan on Sunday slammed an ultranationalist attack on Neve Shalom Synagogue in İstanbul in protest of Israeli restrictions on Palestinians at the al-Aqsa Mosque in Jerusalem.

Speaking to reporters at Istanbul Atatürk Airport before heading to Saudi Arabia on Sunday as part of a Gulf tour, Erdoğan said, “The violation of rights in Jerusalem should never be a reason for Muslims to violate the rights of others.”

“To harm the freedom of worship of those who are members of other religions and their places of worship has no place in our society. Based on this understanding, we are exerting efforts to ease the tensions in Jerusalem at once and for peace to return around the Masjid al-Aqsa once again,” he said.

Also commenting on the issue, Prime Minister Binali Yıldırım condemned the attack on the synagogue from the official Twitter account of Prime Ministry on Sunday.

“We are descendants of a civilization that considers diversity as richness, without discriminating against people in religion, sect, language or race. Therefore, I don’t find the acts against our Jewish people and their houses of worship appropriate and call on people to calm down,” he said.

On Thursday night, ultranationalists from the Alperen Hearths, an offshoot of the Turkish nationalist movement called the Grey Wolves (Ülkü Ocakları), had gathered in front of Neve Shalom in İstanbul and kicked the synagogue’s gates while throwing stones in protest of Israel’s security measures at the Temple Mount.

The Israeli government had installed metal detectors at the holy compound after assailants killed two Israeli police officers last weekend. The Muslim religious body that has authority over the site announced that the metal detectors were an attempt to change the status quo and called on worshipers not to enter the site. Since then, violent clashes between Israeli soldiers and Muslim protesters have been ongoing at the compound.

Three Palestinians were killed in street clashes with İsraeli forces in Jerusalem and three Israelis were stabbed to death at a West Bank settlement on Friday.