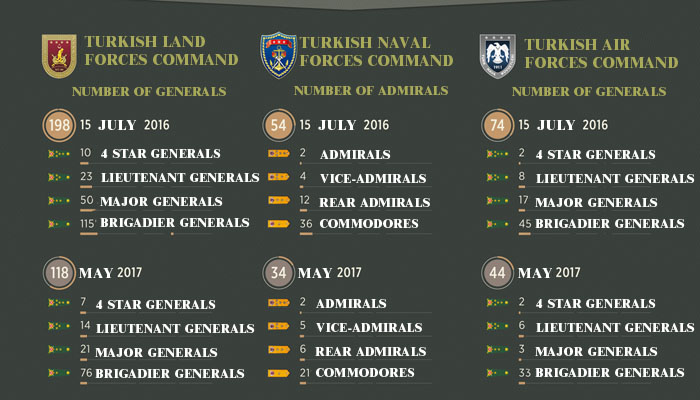 One hundred thirty generals and admirals in the Turkish military were either dismissed or suspended as part of a widespread purge following a failed coup attempt in July of last year.

According to a story by the state-run Anadolu news agency on Sunday, NATO’s second largest standing military force now has 196 generals and admirals, down from 326 in July 2016.

Flag officers in the Turkish Naval Forces had numbered two admirals, four vice-admirals, 12 rear admirals and 66 commodores in July 2016. However, their numbers were two, five, six and 21, respectively, as of May 2017.

Finally, there were two four-star generals, eight lieutenant generals, 17 major generals and 45 brigadier generals in the Turkish Air Forces last year. Their numbers were two, six, three and 33, respectively, as of May 2017.

Turkish government accuses faith-based Gülen movement of being behind the failed coup.