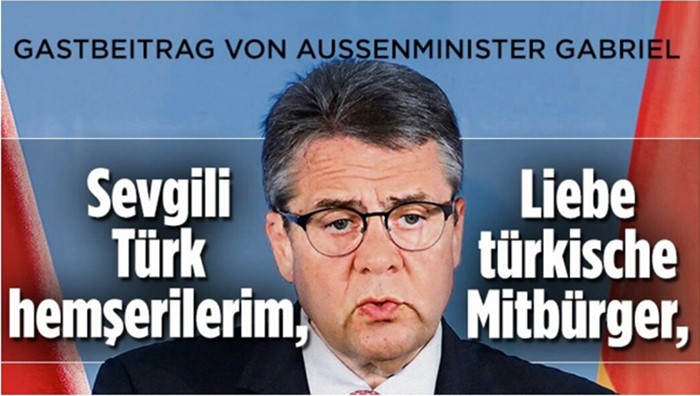 As tension between Berlin and Ankara continues over the arrest of German human rights consultant and activist Peter Steudtner, German Foreign Minister Sigmar Gabriel on Saturday assured the Turkish diaspora that it is part of the fabric of the nation despite the period of difficult relations being experienced by the two countries, Deutsche Welle reported.

According to the report, Gabriel penned an open letter, published in German and Turkish in the mass circulation newspaper Bild, in which he called the friendship between Germans and the estimated 3 million Turks living in the country a “great treasure.”

“We have always been committed to good relations with Turkey because we know that a good relationship between Germany and Turkey is important to you,” said Gabriel, adding that Berlin could not stand idly by while innocent German nationals were arrested. “We must protect our citizens,” he said.

“However difficult the political relations between Germany and Turkey, one thing is clear: You, people of Turkish roots in Germany, belong here with us, whether you have a German passport or not.”

Gabriel on Thursday said Germany is being forced to reorient its Turkey policy in the wake of the arrest of human rights activists and journalists in the country.

Six human rights activists, including Amnesty International’s (AI) Turkey Director İdil Eser and German human rights consultant Steudtner, who were detained on July 5 during a workshop at a hotel on İstanbul’s Büyükada, were put in pre-trial detention by an İstanbul court on Tuesday.

Gabriel warned German citizens of the risks of traveling to Turkey.

German Finance Minister Wolfgang Schaeuble on Friday compared Turkey with the former East Germany in the wake of the growing number of arbitrary arrests in the country.

As part of the war of words, Turkish President Recep Tayyip Erdoğan lambasted German officials, saying Berlin is not powerful enough to defame or scare Turkey.