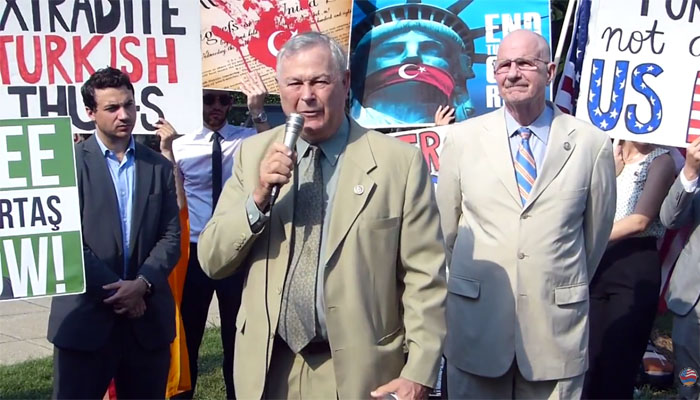 Several US Congressmen from the Republican and Democratic parties on Wednesday attended a protest in front of the Turkish ambassador’s residence in Washington, D.C., to demand an apology from President Recep Tayyip Erdoğan, whose security detail attacked and injured a number of US citizens in May, McClatchy reported on Wednesday.

Organized by the Armenian National Committee of America (ANCA) and the Sheridan Circle May 16 initiative, protesters carried placards denouncing the attack by Erdoğan’s security detail on Kurdish and Armenian protesters on May 16 in a violent brawl outside the residence of the Turkish ambassador while Erdoğan was paying an official visit to US. At least nine protesters were injured.

The protesters demanded the arrest of all pro-Erdoğan attackers who were involved in the brawl.

“We will not stop until the dictatorship that’s being formed in Turkey is defeated,” said Rep. Dana Rohrabacher in a speech during the event.

Along with Rohrabacher, representatives Ted Poe, Jim Costa, John Sarbanes and Jim McGovern were also present at the event.

“I join with each and every one of you here this morning for a principle that is the cornerstone of America and that is our First Amendment rights – our freedom of speech, our freedom of assembly, our freedom to protest,” Costa said.

“The idea that a foreign tyrant can come to the United States … and allow his goons to beat up Americans on American soil is preposterous,” Poe said. “And that person that did the beating needs to held accountable, they need to have a trial, and they need to go to jail if they’re convicted.” He added that a resolution passed unanimously in the US House of Representatives condemning the attack wasn’t enough and said the Turkish nationals who were involved should be extradited to the US to stand trial.

In June, the D.C. Metropolitan Police Department released a video of eight “persons of interest” believed to be in Erdoğan’s security detail who were involved in the attack.

D.C. police department had also issued a wanted list for 12 of President Erdoğan’s bodyguards as criminal suspects for their attacks on protesters on May 16.