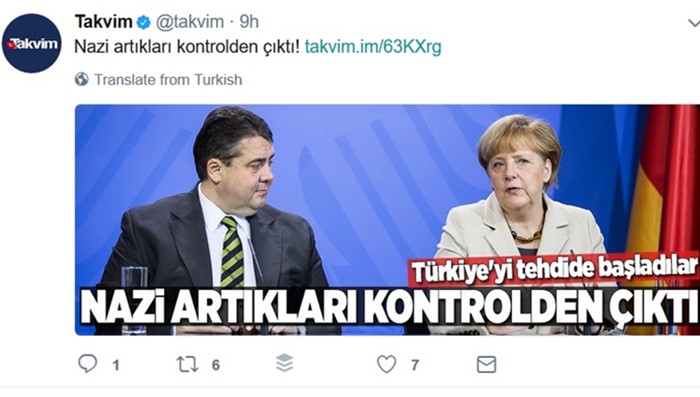 “Nazi remnants are out of control. They started to threaten Turkey,” wrote Takvim, which, along with Sabah, AHaber and Daily Sabah, is run by Serhat Albayrak, the brother of Erdoğan’s son-in-law and Energy Minister Berat Albayrak, recalling recent statements from Gabriel.

Takvim wrote the reverse story, claiming that Berlin has offered Turkey a swap between the two generals and Yücel.

“Merkel, you are engaging in Nazi practices against my Turkish brothers who live there, against my ministers and deputies who go there,” Erdoğan said in a speech in İstanbul as part of campaign for a critical referendum on April 16.

German Foreign Minister Gabriel said on Thursday that his country is being forced to reorient its Turkey policy in the wake of the arrest of human rights activists and journalists in the country.

Six human rights activists, including Amnesty International’s (AI) Turkey Director İdil Eser and German human rights consultant Steudtner, who were detained on July 5 during a workshop at a hotel on İstanbul’s Büyükada, were put in pre-trial detention by an İstanbul court on Tuesday.

Interrupting his vacation to return to Berlin for a statement, Gabriel warned German citizens against the risks of travelling to Turkey while explaining the need for Germany to reorient its Turkey policy.

“We want Turkey to be a part of the West, or at least remain in its current position, but it takes two to tango. … I cannot make out any willingness on the part of the current Turkish government to follow this path with us. For that reason Germany is forced to reorient its Turkey policy. The first consequences will be new travel advisories for German citizens in Turkey,” Gabriel said at a news conference in Berlin on Thursday.

Gabriel said he had been “repeatedly disappointed” even though he tried to improve relations with Turkey and showed patience despite increased tensions.

“We need our policies towards Turkey to go in a new direction. … We can’t continue as we have done until now. … We need to be clearer than we have been until now so those responsible in Ankara understand that such policies are not without consequences,” Gabriel told reporters.

Turkish Foreign Minister Mevlüt Çavuşoğlu has reacted to a Thursday statement by Foreign Minister of Germany Sigmar Gabriel concerning the arrest of German human rights consultant and activist Peter Steudtner, saying Turkey will not submit to threats and blackmail.

“It should be known that threats and blackmail against Turkey will not yield any results,” said Çavuşoğlu during a visit to the Turkish Republic of Northern Cyprus (KKTC) on Thursday.