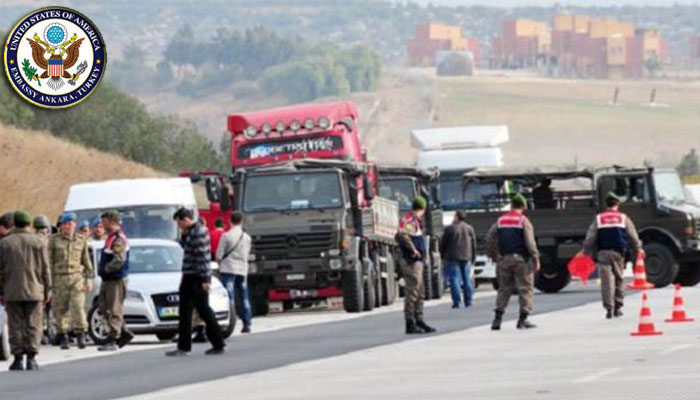 The US Embassy in Ankara in a statement on Wednesday denied Turkish media reports claiming that it had received a request from a Turkish prosecutor for information about a phone call to the embassy in 2014 made by an individual involved in a case involving National Intelligence Organization (MİT) trucks.

According to the US Embassy statement, no Turkish prosecutor has asked for information about a call to the embassy from an associate of Fethullah Gülen, a US-based Turkish Islamic scholar accused by Turkey of masterminding a failed coup last summer, at the time of the MİT trucks case, in which Turkish security forces and prosecutors caught MİT personnel in trucks that were allegedly carrying arms to radical groups in Syria in January 2014.

“We are aware of media reports that the United States Embassy or Consulate General received phone calls from associates of Fethullah Gulen at the time of the ‘MIT trucks’ case in Hatay province. Contrary to press reports, the embassy and consulate general have not received any requests for information or been contacted by the prosecutor regarding this matter, and have no information to substantiate those claims,” the statement said.

Responding to the US Embassy in a written statement on Wednesday, İstanbul Chief Public Prosecutor İrfan Fidan said the request was sent to the embassy at 3:26 p.m. local time on Wednesday.

According to a new indictment drafted on July 4, prosecutors sent the note to the US Embassy asking for the reasons behind the phone calls and with whom the calls were held.

The ruling Justice and Development Party (AKP) and President Recep Tayyip Erdoğan denied that the trucks were carrying weapons to Syria and claimed that it was an attempt by Gülen followers in the security forces and the judiciary to “plot” against the AKP government.