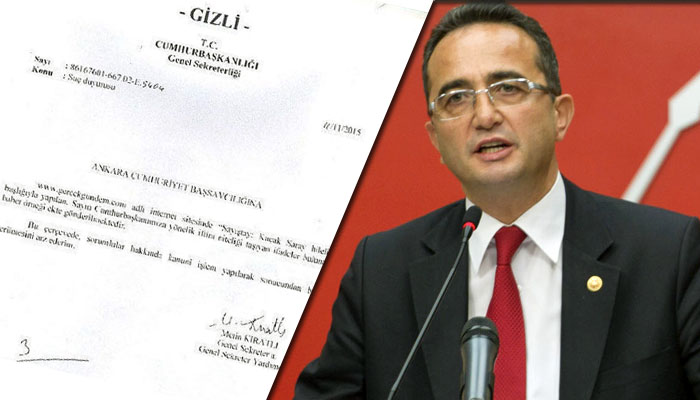 The main opposition Republican People’s Party (CHP) has revealed a document that proves President Recep Tayyip Erdoğan’s office interfered with the judiciary to intimidate a critical website for one of its stories targeting the presidency.

According to a document revealed by CHP Deputy Chairman Bülent Tezcan on Wednesday, a “classified” letter from the secretary-general of the Turkish presidency was sent to the Ankara Public Prosecutor’s Office on Nov. 11, 2015 demanding that the office launch legal action against the www.gercekgundem.com website for its allegedly “insulting” story about President Erdoğan and to keep the presidency advised of developments in the case.

At a press conference on Wednesday, Tezcan said: “Article 138 of the constitution says prosecutor’s offices and courts cannot be instructed by any state institution. Is this not an instruction to the judiciary from your [Erdoğan’s] office?