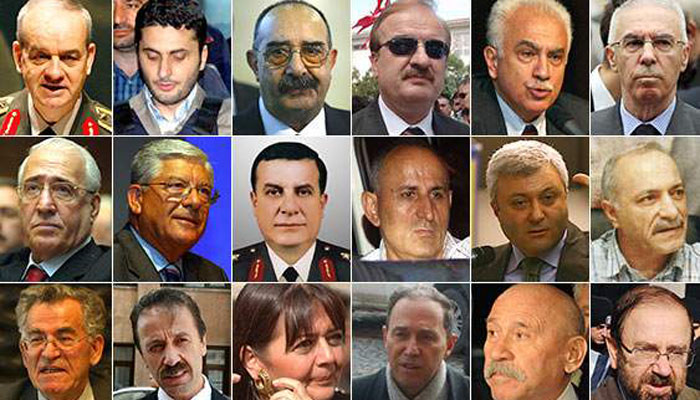 Retrials began on Wednesday in the case of the clandestine Ergenekon organization after Turkey’s Supreme Court of Appeals in April 2016 overturned an earlier verdict by a local court that handed down lengthy prison sentences to 274 defendants, including many former military force commanders, who were accused of plotting to topple the government.

The defendants, who were earlier given aggravated life sentences, were represented by their lawyers during the hearing at the İstanbul 4th High Criminal Court since the Supreme Court of Appeals had overturned the previous verdicts in their favor.

The investigations, which dominated the domestic political scene starting in 2008 and aimed at holding mainly the military bureaucracy accountable for unlawful actions as well as coup plots, had resulted in the trial of high-ranking generals, including former Chief of General Staff İlker Başbuğ, amid complaints of irregularities and the unjust imprisonment of allegedly uninvolved people.

Following corruption investigations in 2013, for which then-Prime Minister Recep Tayyip Erdoğan put the blame on the faith-based Gülen movement, Erdoğan and his government, in an effort to ally with the military and secularists, called the Ergenekon investigations “plots” of the Gülen movement against the military after several suspects were acquitted in the Balyoz (Sledgehammer) and Ergenekon cases.

The verdicts for conviction were annulled by the appeals court, pending a retrial.

The chamber said the local court’s decision concerning the existence of such an organization as Ergenekon was wrong on the grounds that “it is unclear who founded the organization, when it was founded and how it functions.”

The Justice and Development Party (AKP), which strongly supported the case when it was launched in 2008, turned critical of the trial in 2013 and paved the way for the release of the convicts.