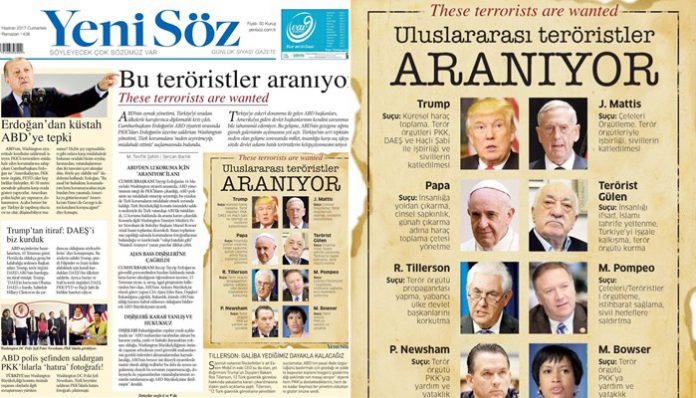 The pro-government Yenisöz daily has placed US President Donald Trump, Pope Francis and US Secretary of State Rex Tillerson on a list of wanted “terrorists” in reaction to arrest warrants issued in Washington for members of President Recep Tayyip Erdoğan security detail.

The daily on Saturday published a story titled “These terrorists are wanted” in which Trump, the pope, Tillerson, Turkish-Islamic scholar Fethullah Gülen, US Secretary of Defense James Mattis, Central Intelligence Agency Director Michael Pompeo, Washington Police Chief Peter Newsham and Mayor of Washington DC Muriel Bowser were labeled as terrorists and accused of supporting terrorist organizations. The daily accused Trump specifically of global extortion and cooperating with terrorist organizations such as the Kurdistan Workers’ Party (PKK) and the Islamic State in Iraq and the Levant (ISIS) as well as murdering civilians.

The Washington Post reported on Thursday that a dozen security guards for Erdoğan are now wanted by D.C. police, who on Thursday declared them criminal suspects and accused them of attacking peaceful protesters during a visit to Washington in May.

According to the report, D.C. Police Chief Newsham said during a press conference on Thursday that “rarely have I seen in 28 years of policing the type of thing I saw in Sheridan Circle [in front of the Turkish ambassador’s residence]. … We all saw the violence that was perpetrated against peaceful protesters, and it’s not something that we’re going to tolerate.”

At the press conference the police read out the names of the suspects, who were identified, with the help of the State Department, by matching surveillance video from the altercation to entry visas and passports. All are charged with various degrees of assault.

In related news on Wednesday, two Turkish men resident in the United States were arrested by US Marshals for their role in the beating of protesters, according to a report by The Daily Caller.

“They have issued arrest warrants for my security detail. What kind of a law is this, what kind of a judiciary is this? We will wage political and legal battle [against the decision],” he said.

On Friday, US Secretary of State Tillerson said there would be no tolerance for those using intimidation and violence to suppress freedom of expression over an arrest decision issued for the bodyguards of Erdoğan.

İstanbul significantly more expensive than 2019 according to Worldwide Cost of...