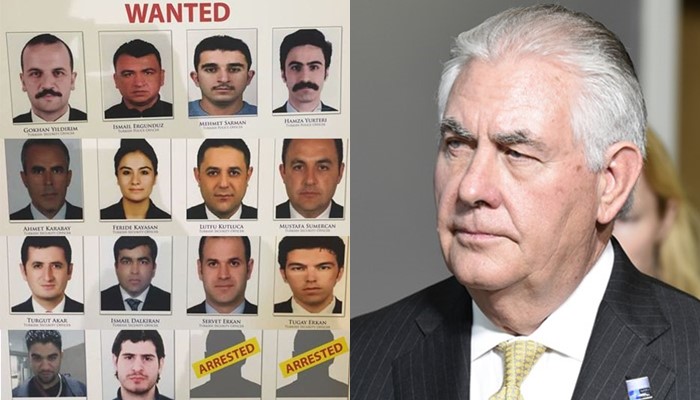 US Secretary of State Rex Tillerson has said there will be no tolerance for those using intimidation and violence to suppress freedom of expression over an arrest decision issued for the bodyguards of Turkish President Recep Tayyip Erdoğan.

The Washington Post reported on Wednesday that arrest warrants have been issued for 12 Turkish security officials who are accused of attacking protesters outside the Turkish ambassador’s residence on May 16 during an official visit by Erdoğan.

While arrest warrants have been issued and the suspects, all believed to be in Turkey, are now wanted in the United States, law enforcement and legal experts have said that bringing the attackers to justice could be difficult since Turkey is unlikely to extradite the suspects or make them available for interviews.

Tillerson said in a written statement concerning the arrest decision: “The charges filed against 12 Turkish security officials send a clear message that the United States does not tolerate individuals who use intimidation and violence to stifle freedom of speech and legitimate political expression.”

State Department Spokesperson Heather Nauert, who read Tillerson’s statement on Thursday, added that security detail accompanying heads of the state benefitted from the immunity afforded to them, yet when they left the US, their immunity was no longer relevant. “Our actions will be responsive and proportional to the charges,” Nauert said. “Our focus is to work with law enforcement officials to ensure that those who are responsible for the violence will be held accountable for those actions.”

In related news on Wednesday, two Turkish men resident in the United States were arrested by US Marshals for their role in the beating of protesters outside the Turkish ambassador’s residence in Washington, D.C., last month, according to a report by The Daily Caller.

The two are accused of attacking American citizens outside the Turkish ambassador’s residence on Sheridan Circle, an upscale diplomatic neighborhood in northwest Washington. The demonstrators had gathered to protest the policies of Erdoğan, who was in the capital for a meeting with US President Donald Trump. When Erdoğan later arrived at the ambassadorial residence, his security detail, along with supporters of the Turkish president, was captured in video footage brutally attacking the group of demonstrators. Nine people were injured in the melee.