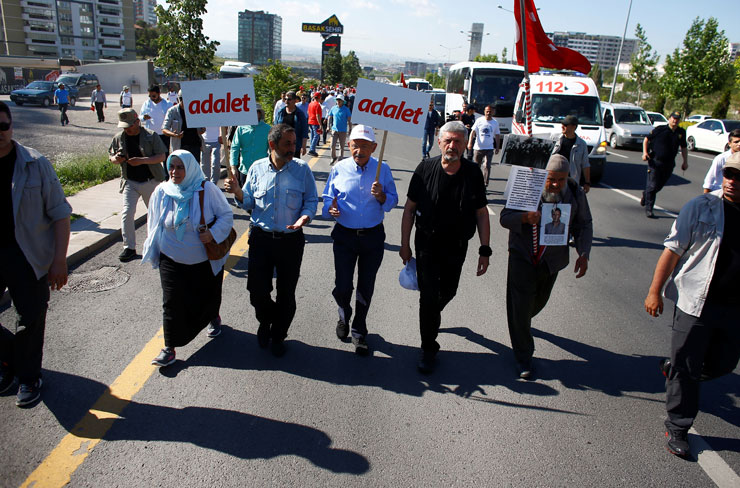 On the second day of a “March of Justice” launched by the main opposition Republican People’s Party (CHP) on Thursday in protest of the arrest of a party deputy, a former Justice and Development Party (AKP) deputy and one of the AKP’s co-founders attended the march in a show of support for the CHP.

CHP leader Kemal Kılıçdaroğlu on Thursday kicked off the march from Güven Park in Turkey’s capital of Ankara to İstanbul in protest of the arrest of CHP deputy Enis Berberoğlu on Wednesday.

A high criminal court in İstanbul on Wednesday handed down a prison sentence of 25 years to Berberoğlu for leaking information for a report on National Intelligence Organization (MİT) trucks transporting weapons to jihadists in Syria, sending him to prison immediately after the ruling was announced.

On the second day of the march on Friday, former AKP deputy Ahmet Faruk Ünsal, who is also former head of the Association of Human Rights and Solidarity for Oppressed Peoples (Mazlumder), AKP co-founder Fatma Bostan Ünsal and Professor Cihangir İslam, who was removed from his post by a government decree, joined Kılıçdaroğlu.

İslam is the husband of former Virtue Party (FP) deputy Merve Kavakçı, who was removed from Parliament when she attempted to take parliamentary oath wearing a headscarf on May 2, 1999.

Among the participants of the march on Friday was veteran journalist Hasan Cemal, who shared a photo of himself from the march while holding a banner that reads “Justice.”

Kılıçdaroğlu and the participants of the march are expected to cover a distance of 22 kilometers on Friday. They plan to walk 428 kilometers in 25 days to arrive in İstanbul, ending in front of Maltepe Prison, where Berberoğlu is incarcerated.