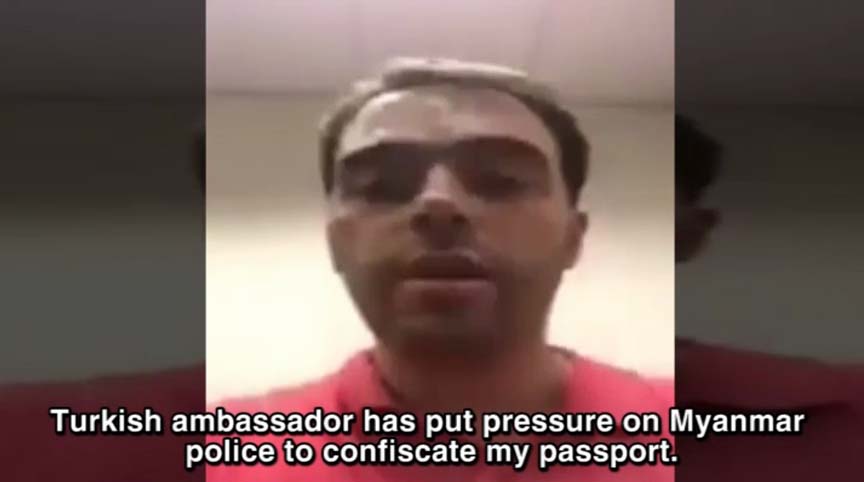 A Myanmar-based Turkish teacher, who reportedly works at a school with links to the faith-based Gülen movement, is being forced out of the country to Dubai and eventually back home to Turkey along with his family.

According to a video shared by teacher M. Furkan Sökmen on social media on Wednesday, he, along with his wife Ayşe and daughter Sibel, was held at an airport in Myanmar and their passports were canceled by the Turkish government.

In the video, which was recorded during an altercation with officials, Furkan is heard saying that the “Turkish ambassador put pressure on Myanmar police to confiscate my passport.”

“Please help me,” Sökmen says, resisting officials who allegedly tried to block him from recording the video.

According to True Stories Twitter account, the family was intercepted before their 17:30 flight from Yangoon to Bangkok.

“After Turkish embassy staff came to the airport, Burmese police deported the family to Dubai on EK 389 No. Flight,” the social media account said, adding that the family would be in Dubai at 05:00. “Then they will be sent to Turkey.”

The True Stories account later wrote that Sökmen and his family were being kept at the Turkish Embassy in Myanmar after they refused to board the plane.

Over the weekend, NBA Oklahoma City Thunder player Enes Kanter, who was briefly detained on Saturday at an airport in Romania upon a request from the Turkish government, told CBS news on Monday that he went to Romania after fleeing Indonesia when he found out he was being pursued by local intelligence.

“I was sleeping around 2:30 or something and my manager knocked on my door. He said the Secret Service and the Indonesian army were looking for me because the Turkish government told them I was a dangerous man,” Kanter said.

The Turkish government has been trying to confiscate more than 50,000 passports including those held by relatives of journalists living in exile due to their links with the Gülen movement, inspired by the views of US-based Turkish Islamic scholar Fethullah Gülen, who the Turkish government says was behind a failed coup in Turkey on July 15.

(Parts of this story originally appeared on TurkeyPurge.com)