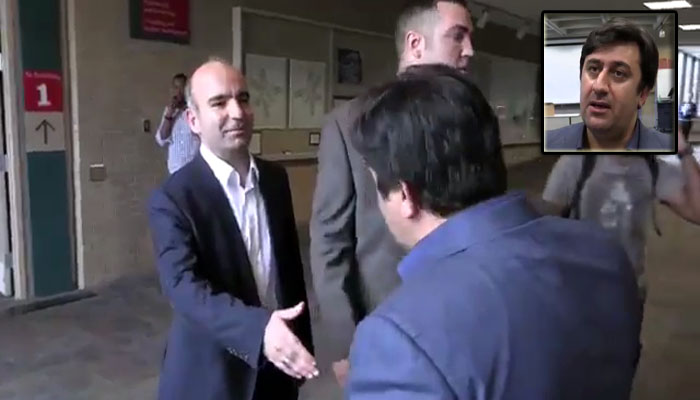 Former Zaman daily Editor-in-Chief Abdulhamit Bilici was subjected to harassment by Islom Shakhbandarov, CEO of the Ahiska Turkish American Community Center and also a staunch supporter of Turkish President Recep Tayyip Erdoğan’s policies, during an event hosted by the Dayton Council on World Affairs titled “Freedom of the Press and Democracy” on May 1.

Speaking with Turkish Minute on Saturday, Bilici said Shakhbandarov interrupted his speech and called him a “traitor” as he was leaving Sinclair College, where the event took place.

“He tried to tease me with questions and interruptions to my speech. I tried to answer his questions. I told him that I respect his views. In solidarity with the Ahiska Turks who faced many difficulties in their land, I offered to shake his hand. He rejected it, saying that I am a ‘traitor.’ Whatever he recorded there, he sent it to AA [Anadolu news agency], and they wrote a report based on false information,” he said.

Underlining that he voiced no complaints about Turkey during the program, Bilici said he spoke about his former colleagues who are now in Turkish prisons.

“I tried to explain about press freedom and what a critical importance democracy has,” he added.

Bilici also told Turkish Minute that a police officer who was present at the event as security told him there was an ongoing investigation into Shakhbandarov over his financial and organizational links with the Diyanet Center of America (DCA), which receives major support from Turkey’s Directorate of Religious Affairs (Diyanet).

In series of tweets after he was accused in social media by pro-Erdoğan figures, Bilici said he was not provided security by the CIA as claimed by the pro-government media but that the organizer of the event provided security for the program after being informed about the fanatic Erdoğan supporters expected to attend the event.

“His experience is so very important to all supporters of Democracy! And yet, I am sad to think of anyone trying to silence it, whatever their means,” she said.

Underlining that the same person had also exhibited threatening behavior towards her, Schultz said Shakhbandarov had told her prior to the event that she would never be able to visit Turkey because he would put her name on a list of people who support terrorists.

Schultz said the local police department got involved and that she was told by the police that a post the pro-Erdoğan supporter put on Facebook accusing Bilici of being a “traitor” was removed after the event. 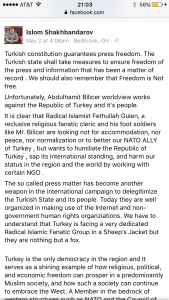 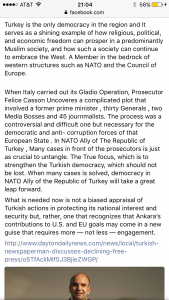 In September of last year, pro-Erdoğan media outlets spread videos and photos of government-critical journalists Aydoğan Vatandaş, Adem Yavuz Arslan, Ekrem Dumanlı and Emre Uslu, who live in different cities in the US.

Following a report in The Wall Street Journal on March 24 revealing that retired Lt. Gen. Mike Flynn, ousted national security advisor of the Trump administration, discussed in a meeting with top Turkish government officials last September the illegal removal from the United States of Turkish Islamic cleric Fethullah Gülen, who is accused by Turkish authorities of masterminding a failed coup in Turkey last summer, and his extrajudicial return to Turkey.

The dates of surveillance of Turkish journalists occurred only days after Flynn’s meeting with Turkish officials.

Michael Rubin, a resident scholar at the American Enterprise Institute and a former Pentagon advisor, wrote in an article following the surveillance incidents that that the US government should come down hard on Turkey if the government was involved in the surveillance.

“U.S. law enforcement should certainly interdict and arrest any Turks or agents on their behalf who are involved in operations on U.S. soil. If they do not have diplomatic immunity, they should be tried and, if found guilty, imprisoned,” Rubin said.

He cited evidence that the Turkish regime has used Turkish journalists and civil society organizations as a cover for espionage activities.