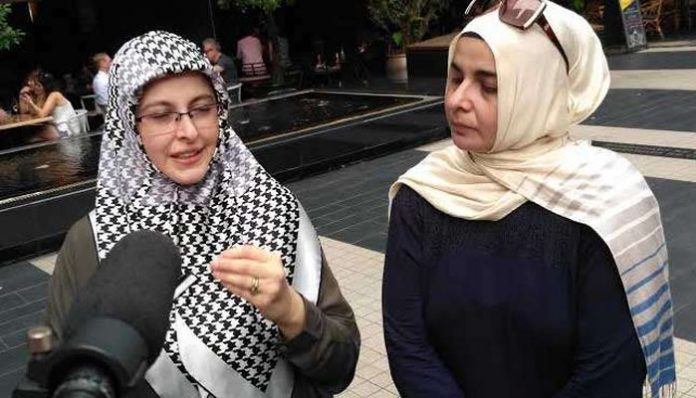 The wives of three Turkish men who were detained by Malaysian police in Kuala Lumpur last week have said their husbands are not Islamic State in Iraq and the Levant (ISIL) terrorists because their understanding of Islam teaches them to oppose violence and promote peace.

Speaking with Malaysian reporters in Kuala Lumpur on Saturday, Ayşe Gül Karaman, wife of Turgay Karaman, who was arrested by Malaysian police on Tuesday on charges of alleged links to ISIL, said that such claims by the Malaysian government are unacceptable as her husband is a person who teaches tolerance and dialogue with other religions and cannot be associated with “murderers.”

According to the Free Malaysia Today website, Karaman’s wife said: “I’ve lived here with my husband for 15 years. Malaysia is not my second home, it is my home because all my babies were born here. All I can say is shame on the Malaysian government.”

“My husband is loving, caring and patient. He believes that everyone, no matter what color their skin or what their religion, can live in peace with one another. I don’t have to say my husband is not guilty because he is not!” Karaman said.

Underlining that she and her husband consider ISIL a terrorist organization, Hatice Özçelik also echoed the same sentiments about her husband, saying the police could not prove her husband was guilty of any crime.

“We believe ISIL is a terrorist organization and we are against them. We also believe like it says in the Quran that ‘killing one man is akin to killing the whole of humanity’,” she said.

According to Özçelik, the Malaysian government is making a huge mistake that should be corrected soon as there is no proof against their husbands.

Turgay Karaman, the principal of the Gülen movement-affiliated Time International School in Ipoh, Malaysia, and Turkish businessman İhsan Aslan were abducted by unidentified persons in Kuala Lumpur on Tuesday.

Later on Tuesday, Malaysian police said in a statement that the two Turkish nationals were arrested due to their links with ISIL.

On Thursday, İsmet Özçelik, a Turkish academic with a UNHCR refugee card, was detained again on Thursday in Malaysia. He was arrested by Malay officials on Dec. 13 upon an alleged request by Turkish authorities in Malaysia.

The Malaysian police statement received much criticism because the three Turkish nationals were supporters of the Gülen movement, which is known for repudiating an extremist interpretation of Islam and promoting dialogue with the West.

Human Rights Watch said Friday that the Malaysian authorities should provide the basis for holding the men and allow them full access to legal counsel and contact with their families.

Fethullah Gülen, who inspires the movement, has been under attack by President Recep Tayyip Erdoğan and his loyal media for his meeting with Pope John Paul II in 1998, as part of the Muslim cleric’s outreach and dialogue efforts among faiths.

In October of last year, two Turkish citizens were extradited by Malaysian authorities upon a request from their Turkish counterparts as part of the latter’s clampdown against the movement after they were abducted by Turkish intelligence officers in Malaysia.

The Turkish government accuses the movement of masterminding a July 15 coup attempt, although the movement strongly denies any involvement.

The movement is known for its educational and aid activities in over 170 countries, but Turkish Foreign Ministry bureaucrats have been trying to expand domestic pressure to overseas subsidiaries of the movement in the recent past.