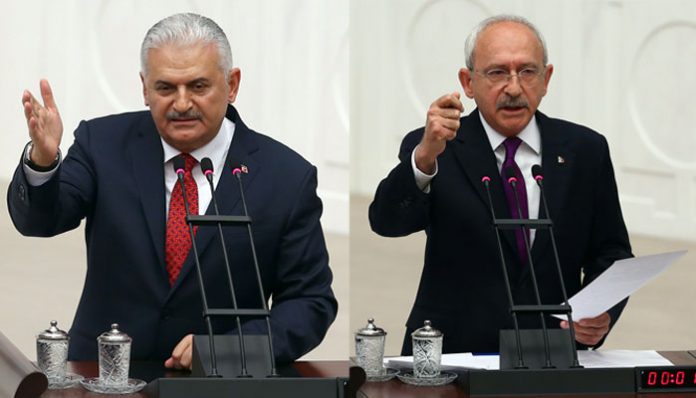 A battle of words raged between opposition and ruling party leaders during a special session of Parliament on Sunday over a change in the system of governance in Turkey approved in an April 16 referendum that expands President Recep Tayyip Erdoğan’s powers and replaces the current parliamentary system with an executive presidency.

Trading barbs during a special session of Parliament to mark April 23, the 97th anniversary of the Turkish Grand National Assembly (TBMM), main opposition leader Kemal Kılıçdaroğlu said the approval of the constitutional amendments in the referendum had weakened Parliament’s system of checks and balances and would pave the way for one-man rule.

“If there is a public will, it was manifested here. No office, no position, no person and no group can annul Parliament. Period. I have to respect this parliament’s reputation. I have to respect the public will. History will never forgive those who granted authority to transfer public sovereignty to one person,” Kılıçdaroğlu said.

Upon Kılıçdaroğlu’s criticism, Prime Minister Binali Yıldırım took the floor and began quarreling with him. Parliament Speaker İsmail Kahraman and Justice Minister Bekir Bozdağ were also involved in the argument.

Underlining that there is no such thing as the annulment of Parliament, Yıldırım said, “Parliamentary and presidential elections will continue to take place.”

President Erdoğan watched the debate from a balcony in Parliament that was reserved for him for the special session.

The constitutional reform package that will introduce an executive presidency in Turkey received 51.4 percent of the vote in favor in the referendum, but some opposition parties have contested the results due to the use of unstamped ballots.